I have repeated this mistake before and probably will again but I've started acquiring parts for the next project before finishing the current one. I now have enough Mobike rear hubs to proceed with the aquisition of everything-else I shall need such as fibreglass bow limbs for the leaf springs. Two of these hubs will be reworked to run backwards for the left hand side hubs. I also now have one and a half hubs as spares. I have 4 Mobike single side mounted alloy wheels and solid tyres. I do plan to get the Church Pod running before getting too deeply stuck into this project so progress here will largely await progress on the other. 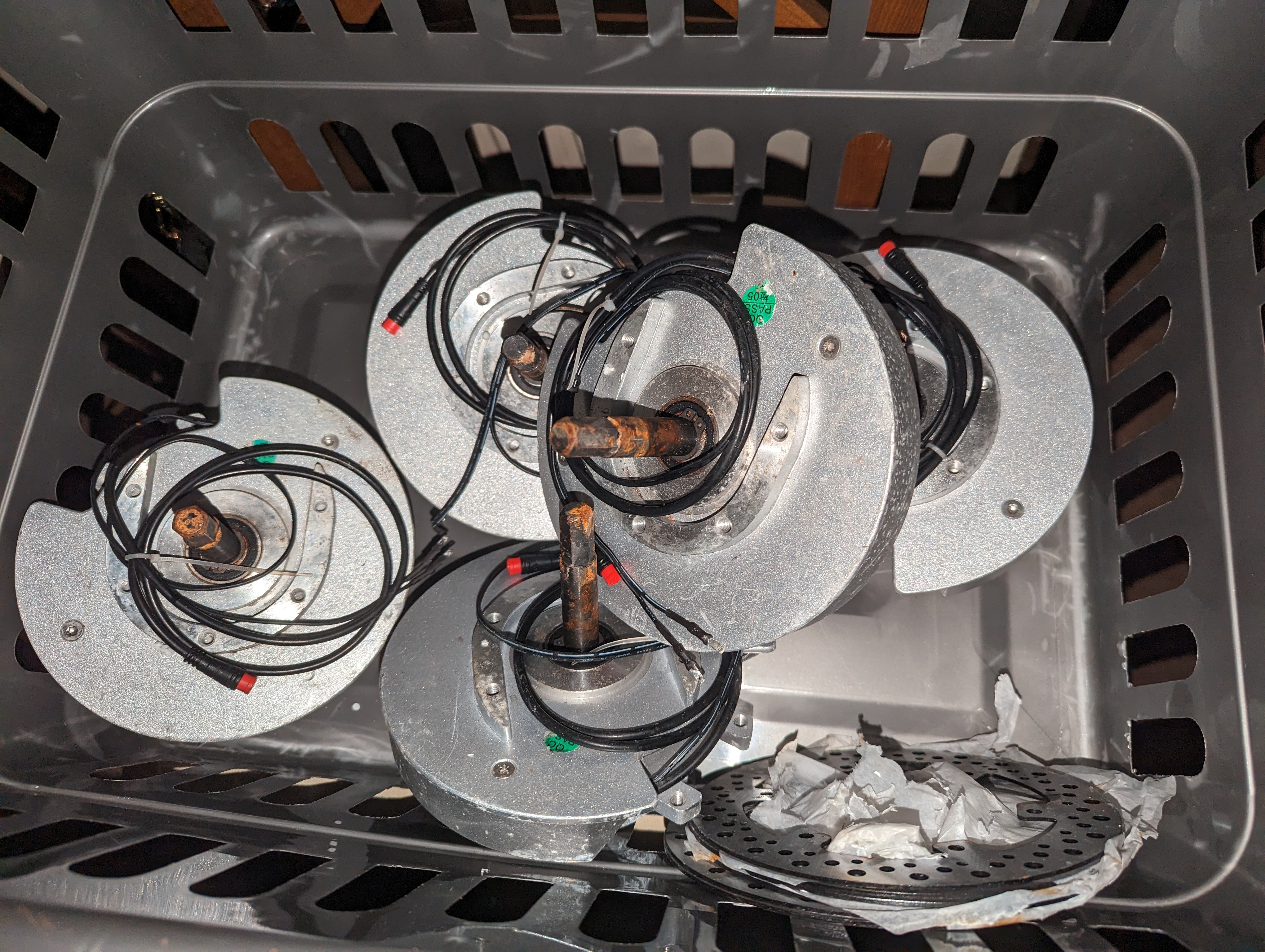 The outline is for a fairly short (40") wheelbase quad with numerous bow limbs used as leaf springs with a steerable hub at every ccorner. Steering will be from a pair of tank style bars. I have a spare TSDZ2 so that will find a home here too. There'll be a three chain system (one to the cassette, one from there to the front axle and a third one from there to the rear axle). The hubs will act as a locking differential across each axle and Toyota Prius intermediate steering shafts will act as driveshafts because they are just short enough, will expand and contract to cover suspension movement and were about the cheapest solution I could find. Like Danny I will probably have to pin these to secure them fully but they can at least chip in splines on the driveshaft part to bite into mild steel on the hub and centre parts as a contributory drive medium. The chassis will be a single beam with a clamping system at each end for three or 4 bow limbs top and bottom. One thing I'll have to experiment with is how much length to allow for the bow limbs to have in order to suspend my lard successfully. Another will be how much to ask the rear to steer in relation to the front and I suspect this will involve some field testing and a field test dummy (me) sucking it and seeing what happens at various amounts and speeds. I'll keep the solid tyres at least to start with as it'll be a pleasure not to have to pump them up whilst building the thing. I'm hoping the suspension will temper the hard nature of them. If they prove awful then I can always get some tubular tyres once up and running which will be a first for me. 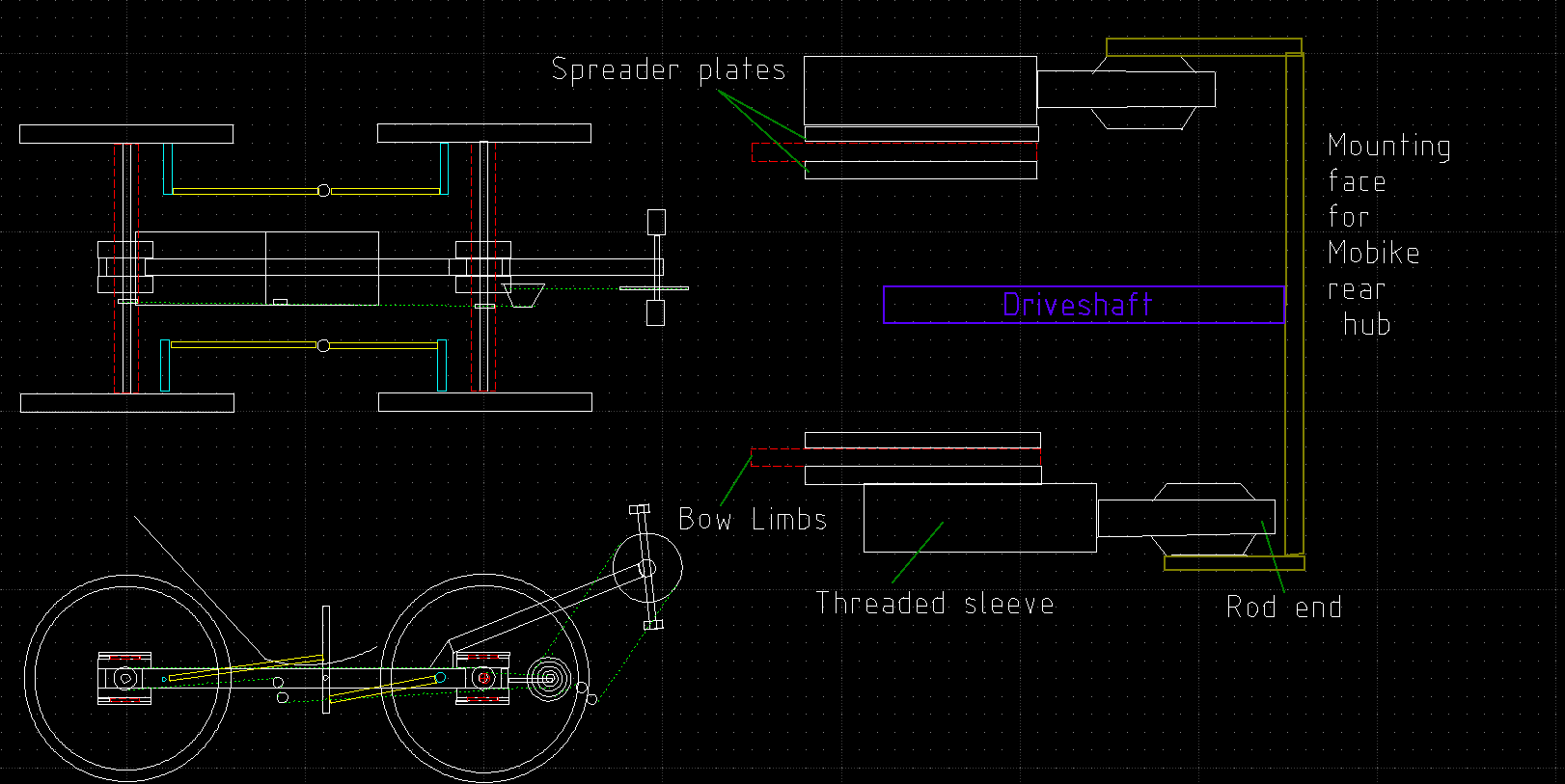 Well this slipped in under the radar .....
need to get my finger out else will be beaten to the punch as it were
Toyota Prius intermediate steering shafts so questions ?
What is the diameter of the outside of the central shaft ?
Why are they 1/2 the price new as they are s/h ?

I chose Prius 09-16 intermediate steering shafts because they were one of only a handful I could find dimensions for. They were also amongst the cheapest I could find at £19 each new on ebay. New ones are almost certainly pattern parts not made by Toyota but designed to fit. Secondhand are presumably genuine Toyota items. I'd choose the cheap new pattern over the expensive used genuine any day.

I believe these can be shortened further by dissassembling and chopping off some outer and inner but have yet to try that. I'm marginal on the minimum length for my design so may have to shorten them but am hoping not to. They are fairly heavy though. I could have opted for much cheaper and lighter U/Js than are on these but wanted proper needle roller bearings in them not just a pinned hole on the cheap ones. If not needing a sliding element to them I could have used a much lighter piece of steel tube to join two decent U/Js but suspension makes an expanding driveshaft essential. I needed a splined hole bigger than the Mobike spindles. The opposite - turning the spindles down to suit a smaller U/J would have been ideal but they are hardened and likely to kill a lot of tooling so I went the other way and will need to make a shim to weld around the spindle. The shim will be mild steel so I'm hoping the teeth in the U/Js will bite into it somewhat which they certainly wouldn't do if clamping direct to the hardened spindles. 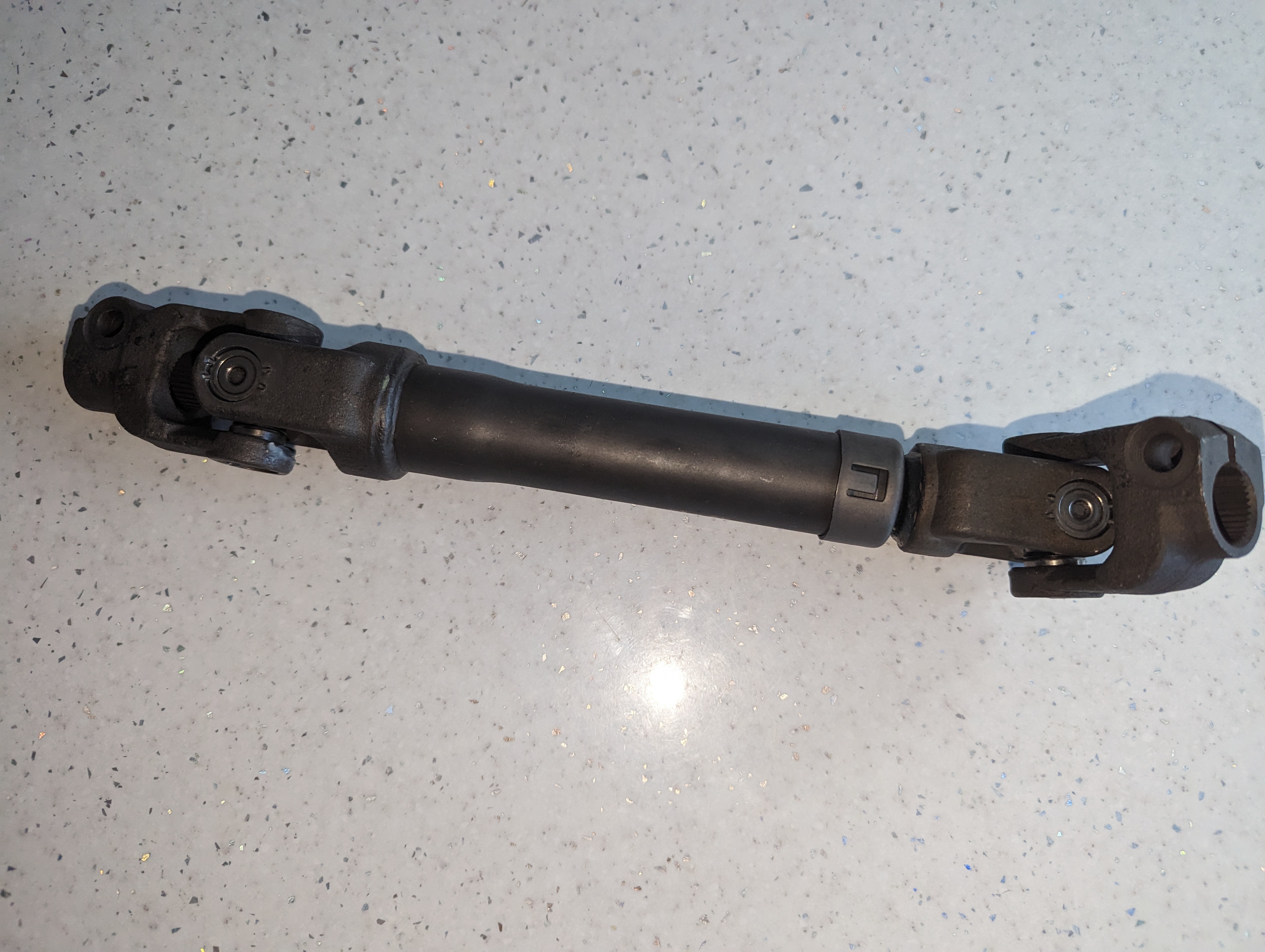 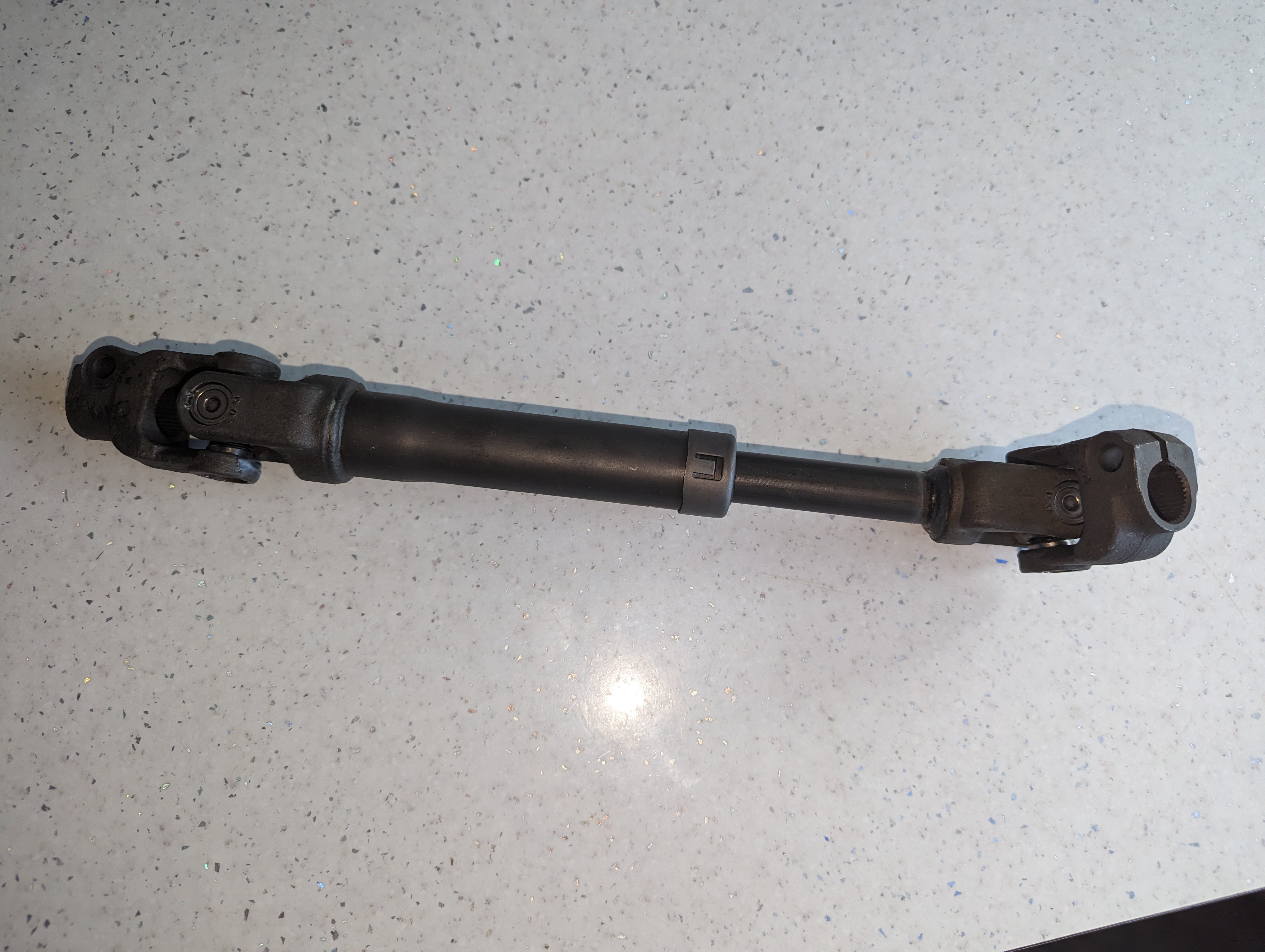 One thing I may do with these shafts is to turn the inner end around 180 degrees. These shafts are designed to turn slowly so are not balanced. To do 10mph means running at 140rpm. I do not know if that will be an issue. Turning the inner around 180 degrees means the nip bolts (can I still say nip these days?) will be opposite each other. Not an ideal but possibly better than as std.
Last edited: Jan 26, 2023

I can see why you picked them for your application as they are being used as drive shafts.
I may have needed the u/j's if I was to build a delta , however only for steering use so probably overkill.

Do you feel you have a need for 4ws & 4wd or is this purely ' because you can ' , obviously nothing wrong with that !

No need for such a beast at all. Purely because I (hopefully) can.

Popshot said:
No need for such a beast at all. Purely because I (hopefully) can.
Click to expand...

A teardown of the Mobike rear hub to swap to left side use.

These hubs came with the disc and caliper already removed but removing them ought to be self explanatory.
First remove the circlip here 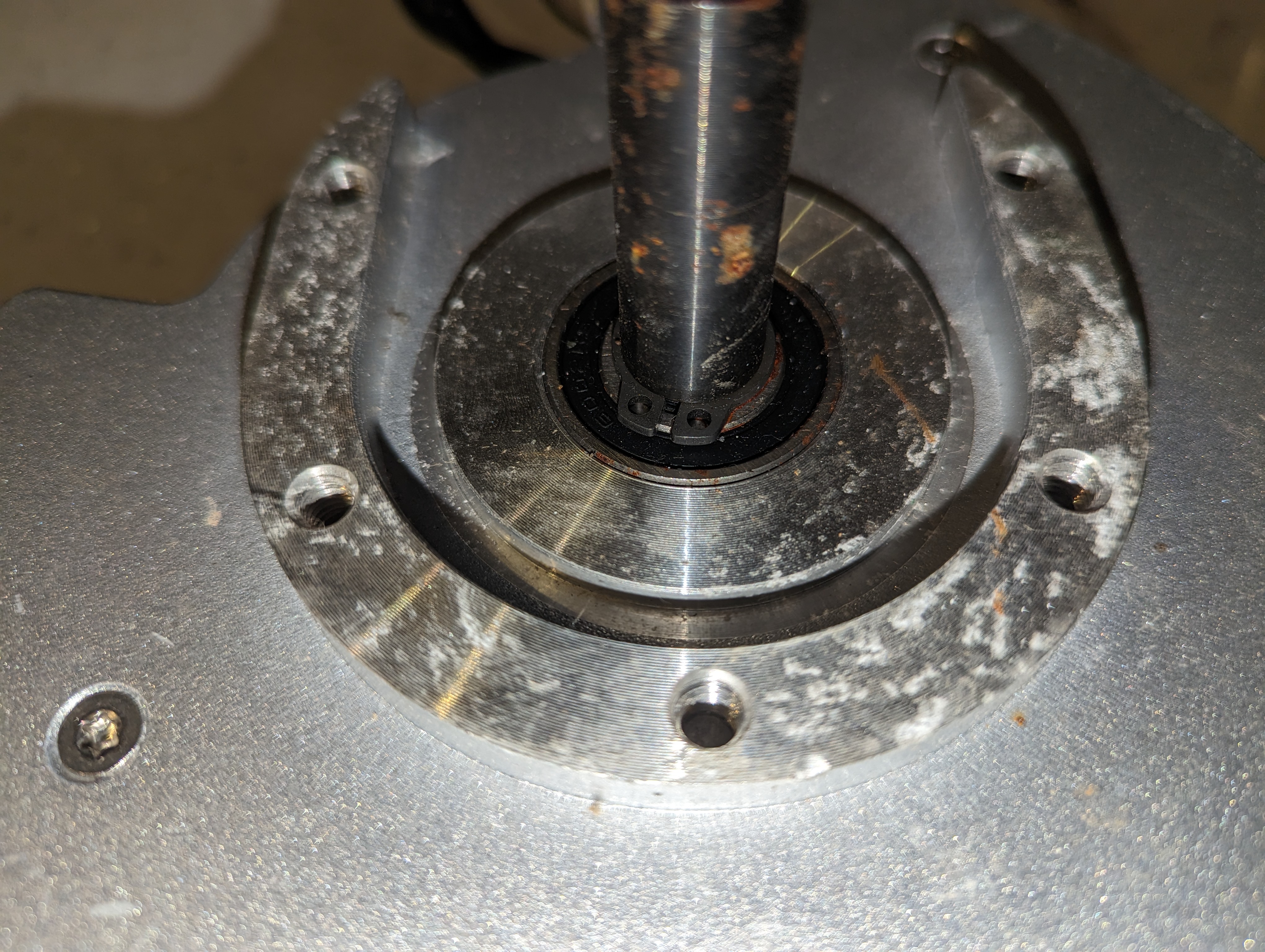 Now get a soft hammer and whack the spindle through the hub. It'll get so far through then bounce. This is because there are 20 magnets in the dynamo not wanting it to go further so when it bounces just shove it hard.

You now have this. 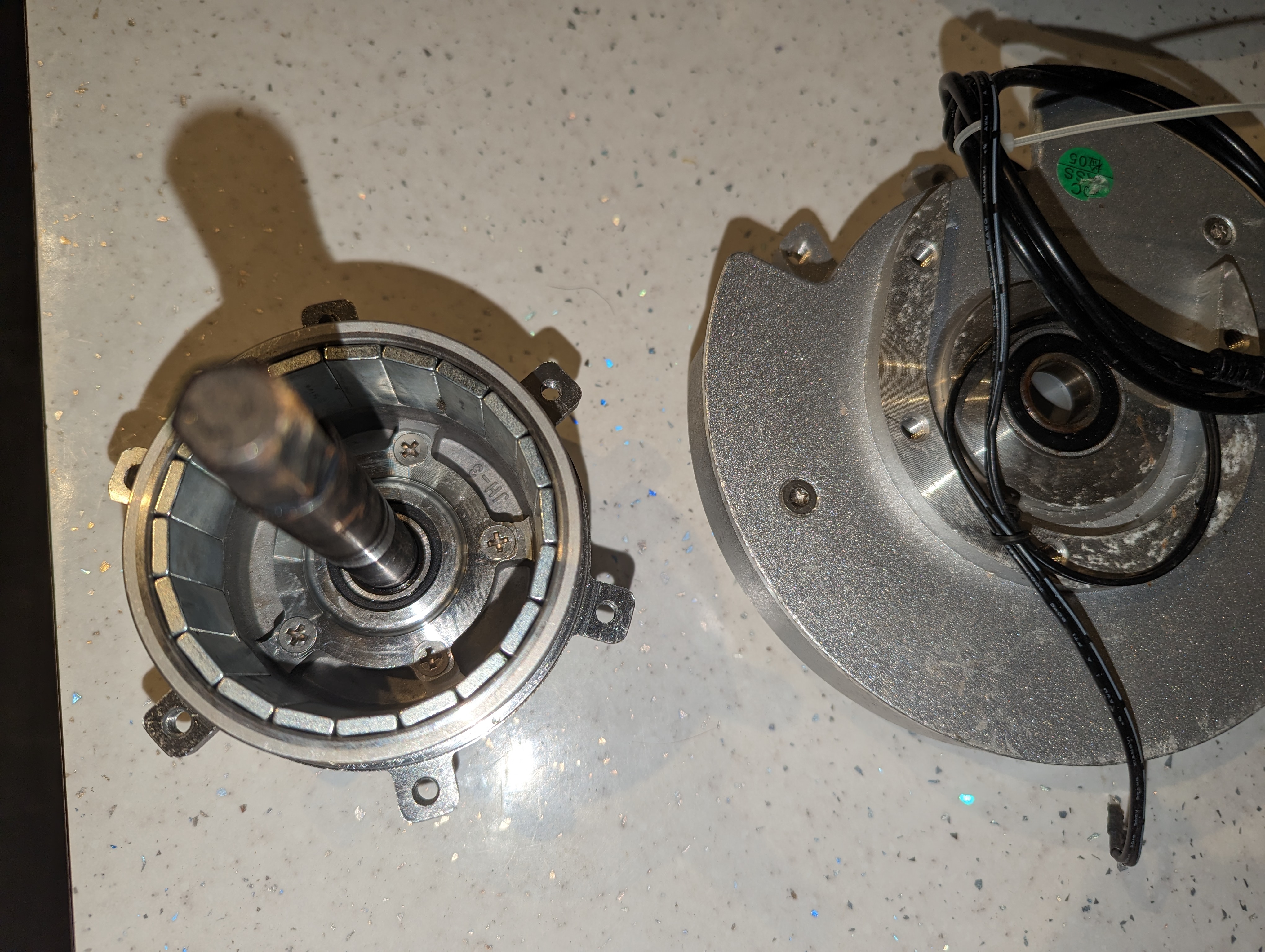 Undo the 5 screws and pull the spindle out. Remove the magnets (unless you want a dynamo) using a screwdriver and small hammer. They have some very mild glue on them but are mainly held just by their magnetism. The magnets are VERY strong so watch fingers.

You now have this. 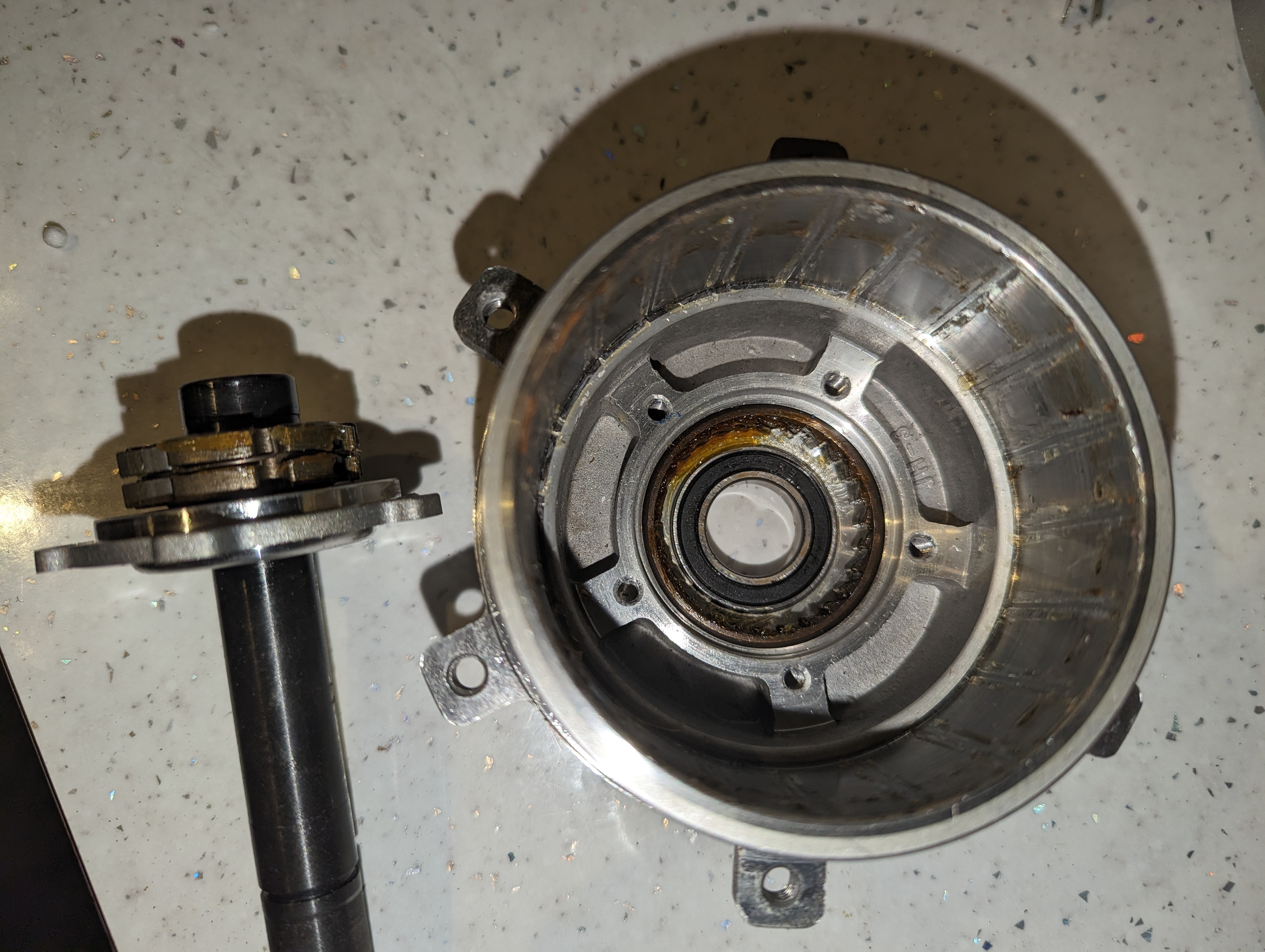 The pawls just knock off, turn round and knock back on the spindle. The ratchet is screwed in on a left hand thread. Make a tool to go across the teeth and screw it out, turn it round and loctite it back in. 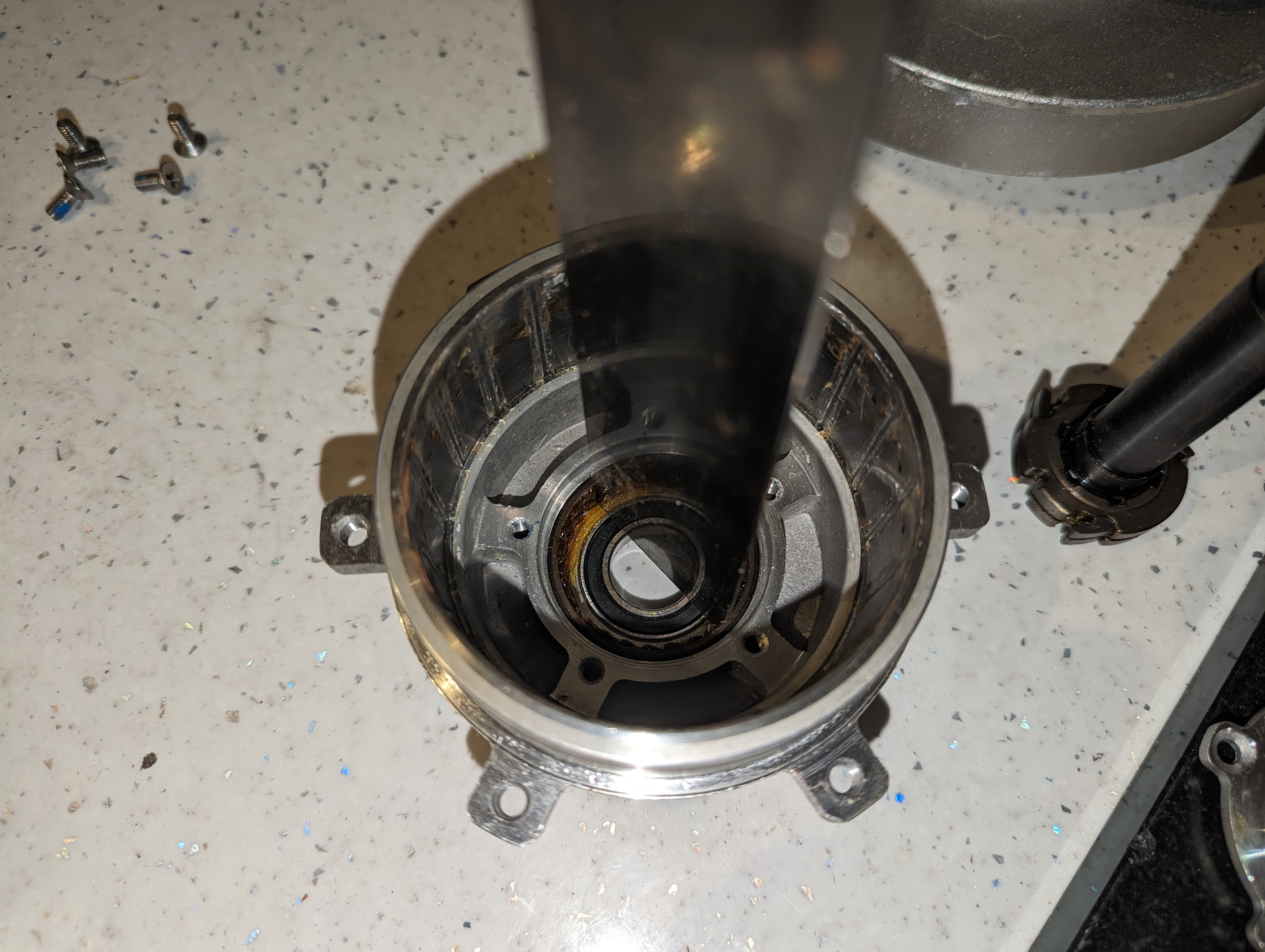 Don't worry about the loctite being insufficient to hold it as this bit will hold the ratchet in once reassenbled even if the loctite fails. 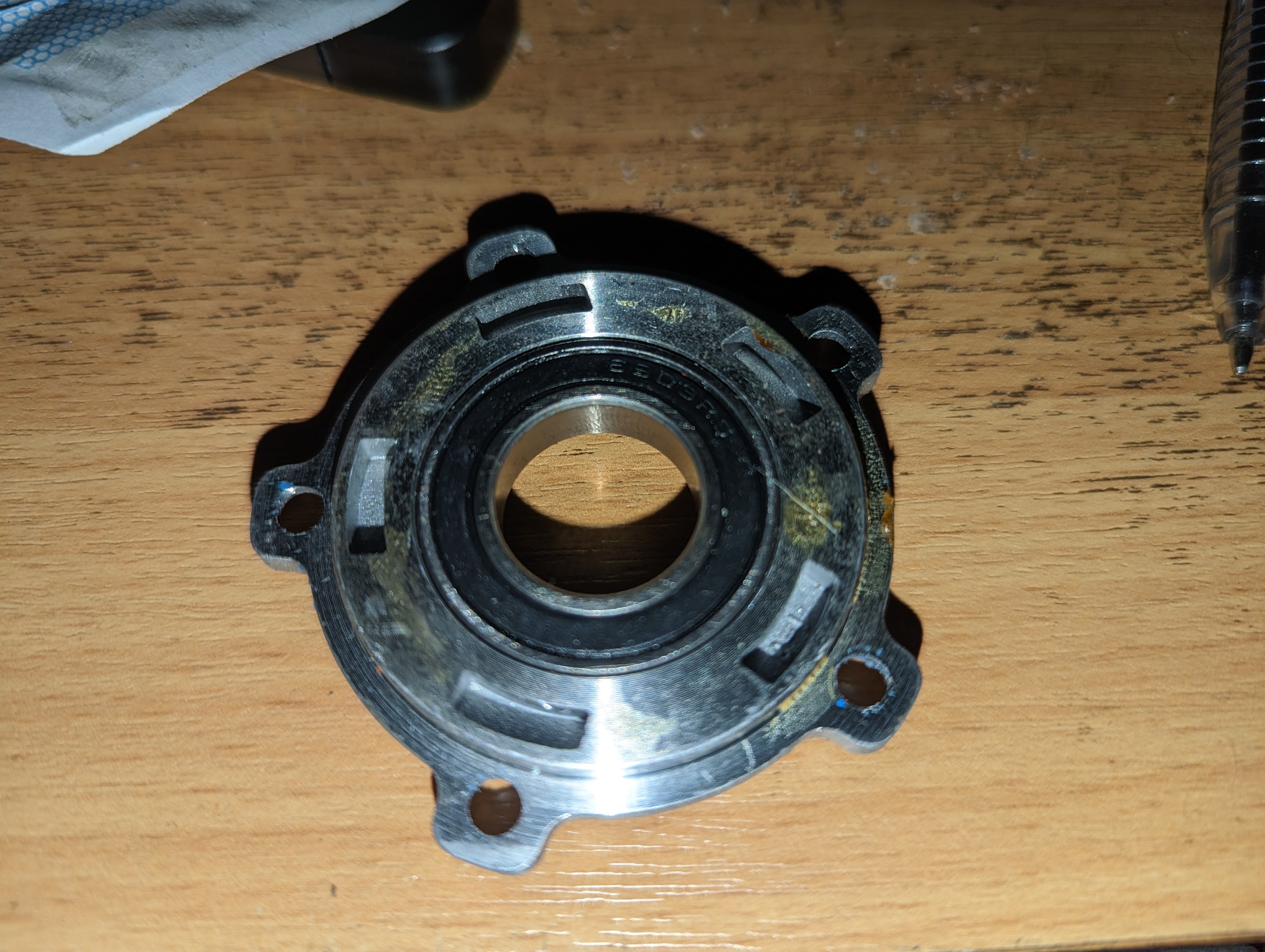 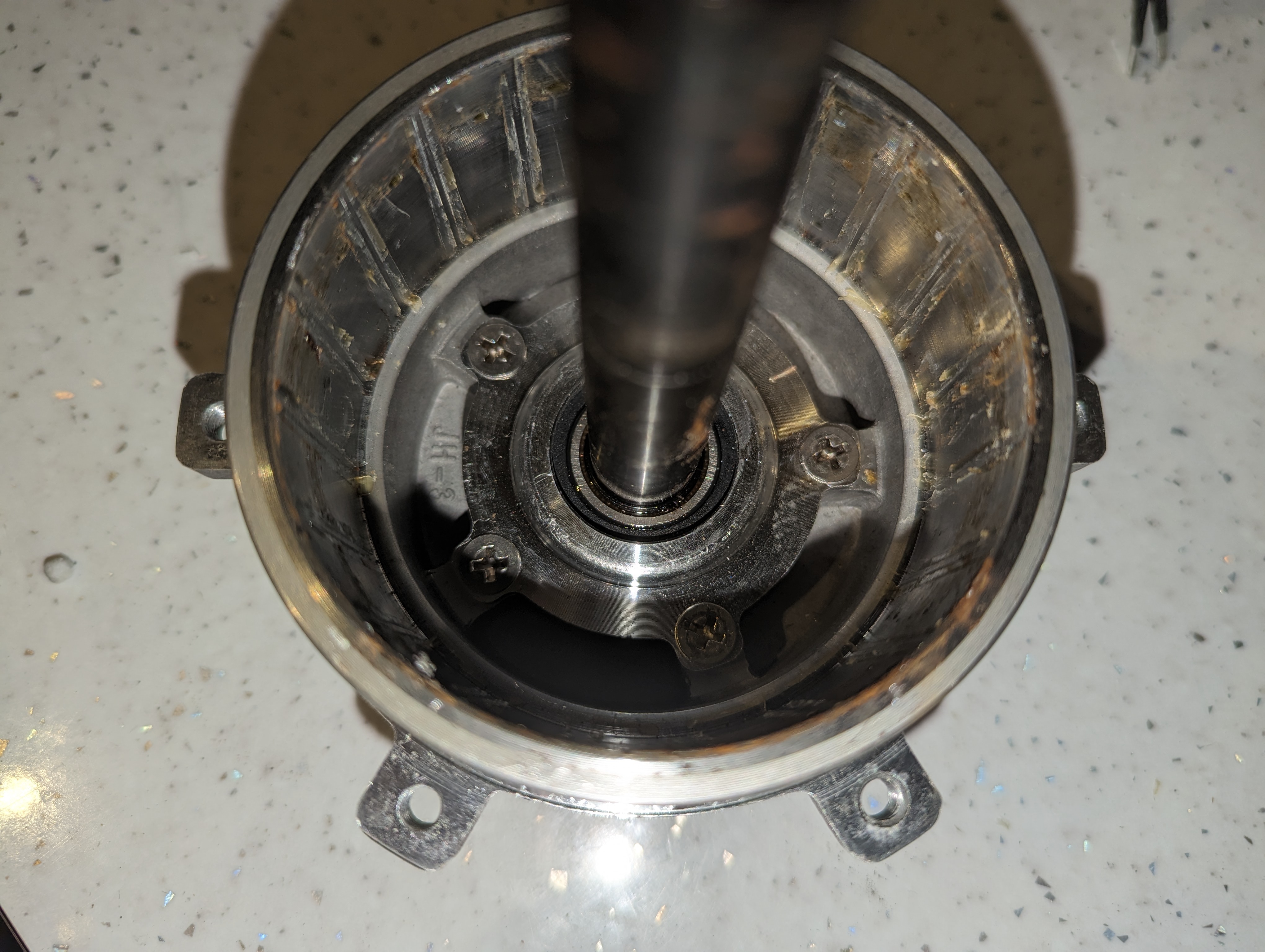 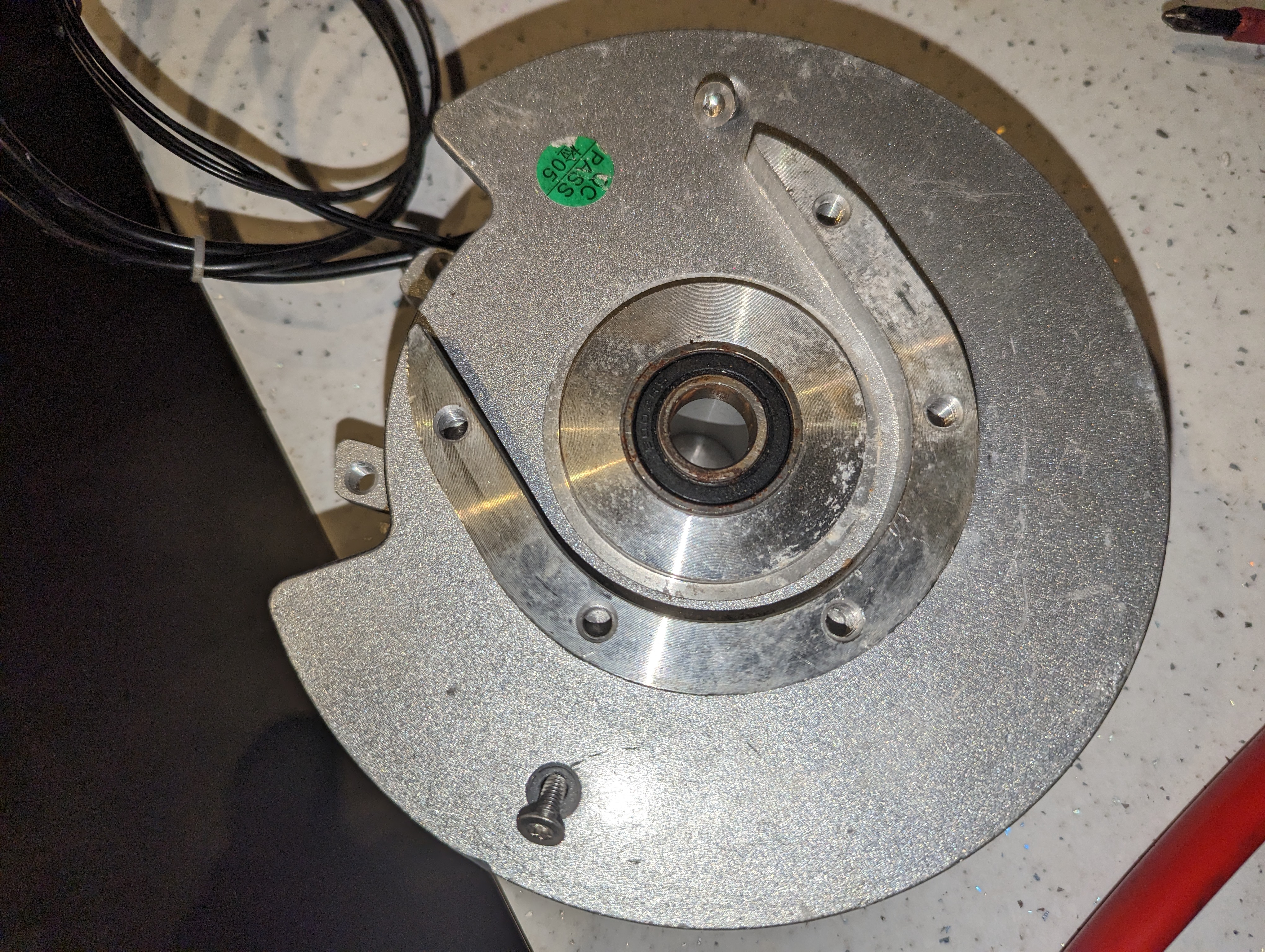 Turn it over and you get this. 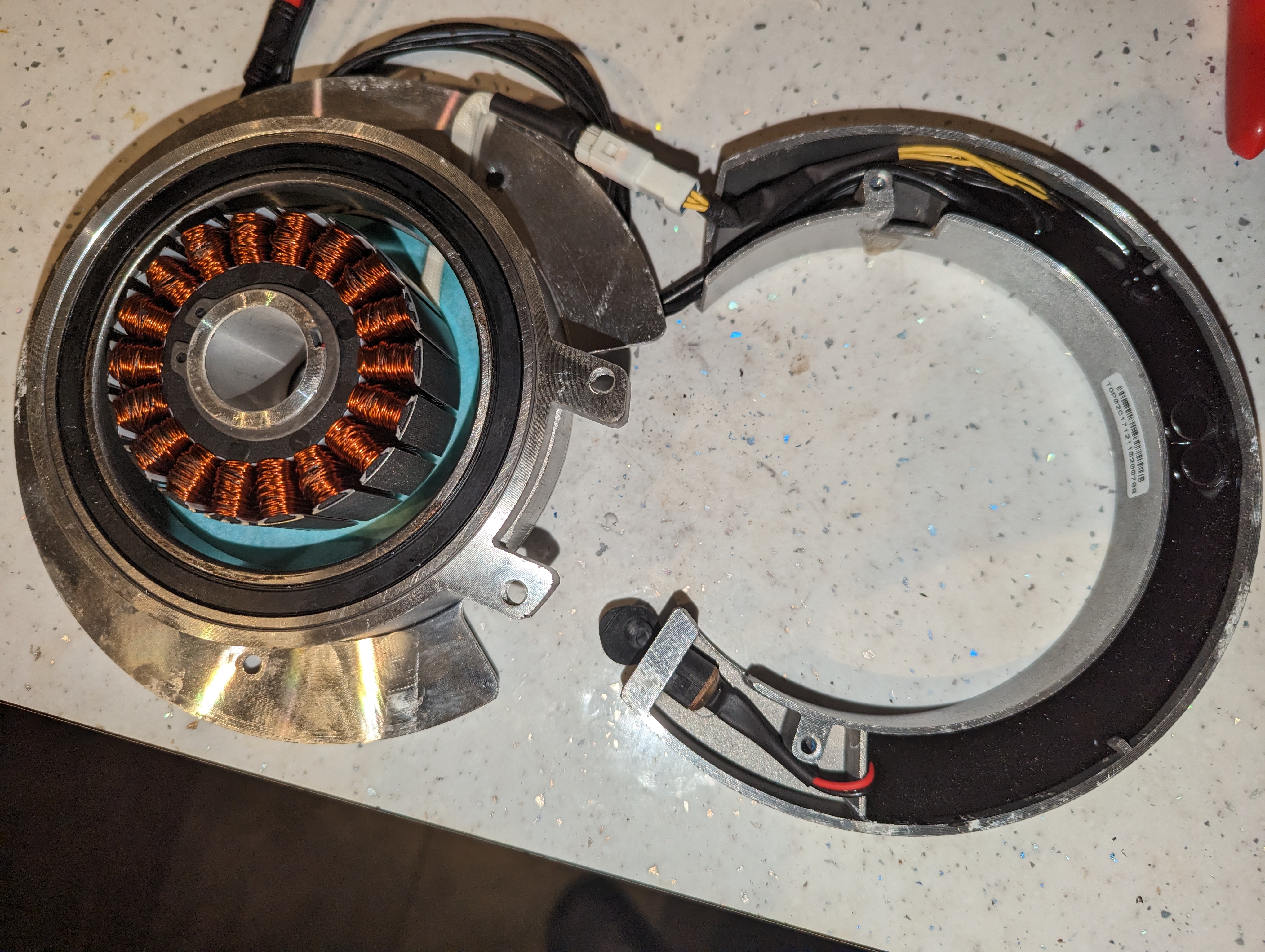 Remove the circlip and the windings just pull off. I didn't want the dynamo parts so I simply cut the wires and removed. They will undo at the white connector if you want them. 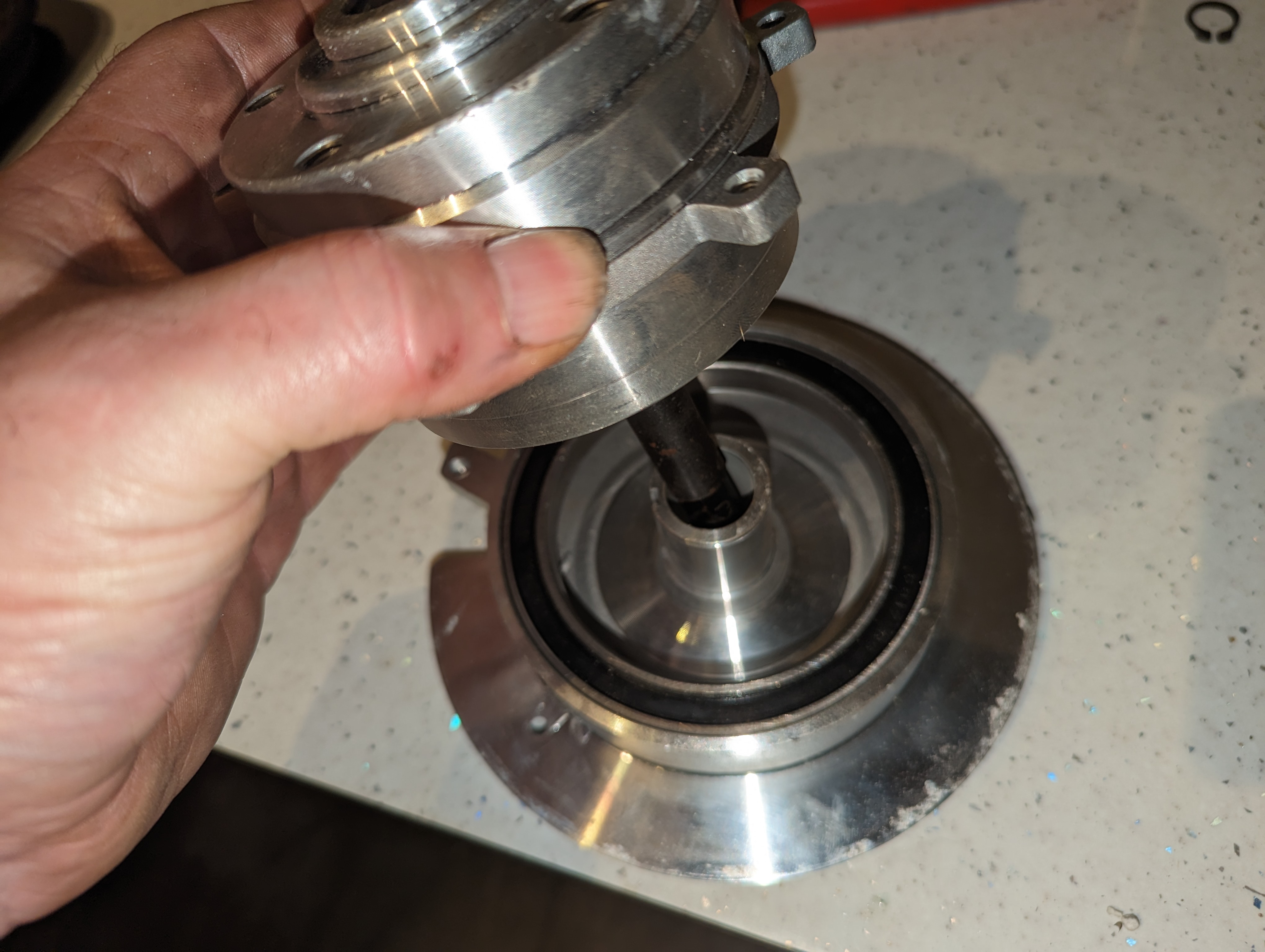 It'll need a good whack to get the spindle through the bearings and put the circlip back. Add the disc and caliper. You now have a backwards running Mobike rear hub that has lost a whole kilo, from 2.8KG to 1.8KG.
Last edited: Tuesday at 7:51 AM
You must log in or register to reply here.
Share:
Facebook Twitter Google+ Reddit Pinterest Tumblr WhatsApp Email Link
Top