rykoala said:
I'll be doing a full write up, but I got the new welder, unboxed it, and set it up. The short version: whoa. I did't know how gutless my old welder was! At 50A I'm getting full welds and blowing holes in things! I've got more learning to do ;-)
Click to expand...

I didn't have time for getting any pictures, but I did make progress tonight. The rear frame is now welded. The welds aren't very pretty as I'm still figuring this out. Anything with slag in it will get ground down and re-welded. But for now, the rear frame is together without clamps.

After working with the new welder for another evening I've come to the conclusion that my old welder was only putting out about 20 amps. Yikes. No wonder I had troubles!
Ryan - Elma WA
I go by "geocrasher" everywhere else
Instagram: https://www.instagram.com/miscdotgeek/
Blog/Website: https://miscdotgeek.com
E

Welding gets better as you do it more often. Just try and also play a bit with the settings.
You can always clean it up and do it over.

Emiel said:
Welding gets better as you do it more often. Just try and also play a bit with the settings.
You can always clean it up and do it over.
Click to expand...

Indeed. I think I want to get something that says "Weld. Grind. Repeat." It describes so much for me LOL

No, it's not. I was putting holes in things even at 30 amps with my new welder, and it wasn't until I turned it down to 20A that it started "feeling" like my old welder.

I also cranked the new one up to 70A and did a lap joint on two 3/16" pieces of flat steel, which I was completely unable to do before. I'll try to get some pictures tonight.
Ryan - Elma WA
I go by "geocrasher" everywhere else
Instagram: https://www.instagram.com/miscdotgeek/
Blog/Website: https://miscdotgeek.com
E

Weld, grind and weld again. I did the same in the beginning and I still need to clean some welds. But after a while it grinding gets les.

I hit it with the wire brush grinder attachment to clean it up some and got a picture of the complete-for-now assembly: 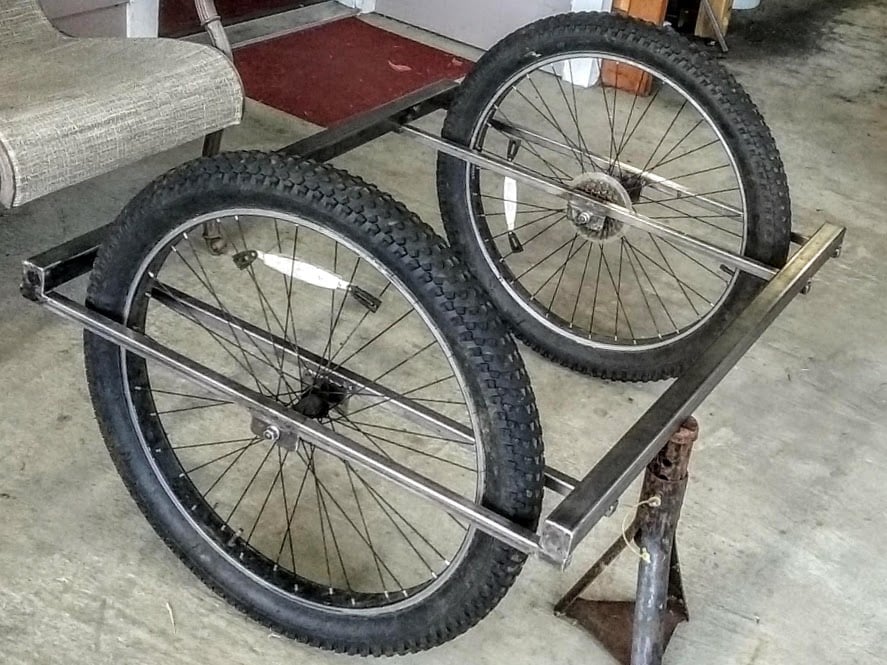 Slow progress due to a pretty hefty learning curve, but I'm loving every minute of it

Oh, and here's my new welder! 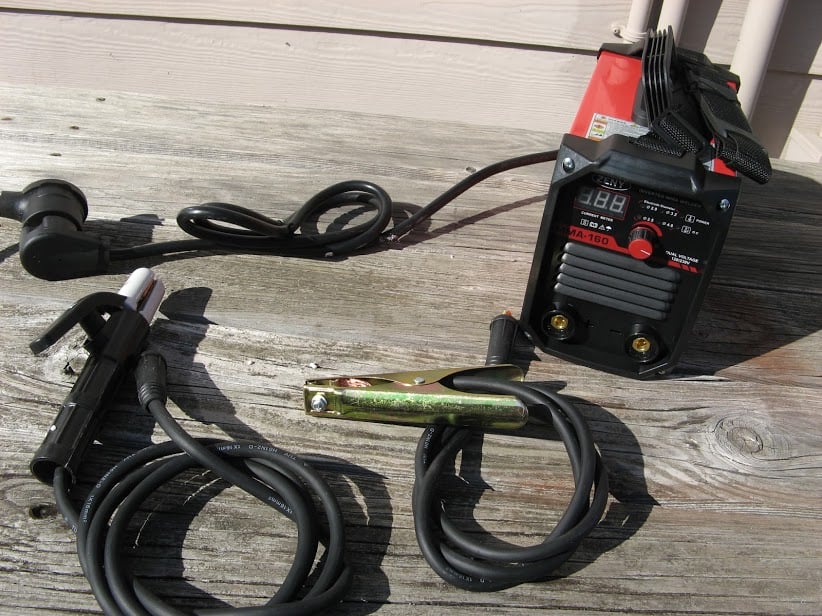 Thanks, @SirJoey I'm hoping to have a rolling chassis soon.
Ryan - Elma WA
I go by "geocrasher" everywhere else
Instagram: https://www.instagram.com/miscdotgeek/
Blog/Website: https://miscdotgeek.com

rykoala said:
I'm hoping to have a rolling chassis soon.
Click to expand...

That's a major milestone on any build, and was
always one of the most exciting moments for me!
***
"Bent since 1985, but still not broken!"
Proud AZ Krew Member since June 25, 2007

Had quite a long day today, but in a few hours to work on the trike. Following the old adage "measure twice, cut once" I measured my 10 foot length of 1.5" square tubing and cut a 77" length for the main boom. I measured the center between the wheels and and marked it on the rear frame, marked the location for the main boom, and clamped it down. Then I panicked, re-measured a few times, and then calmed- I had cut correctly! Here she is: 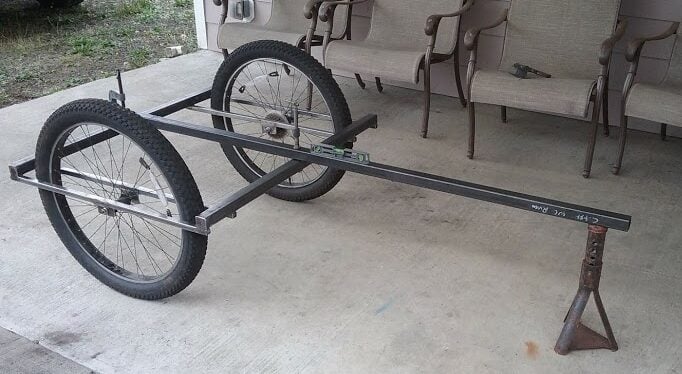 I bummed around a bit looking for a head tube that would match the fork and front wheel from an aluminum-framed Trek kids bike. I found one in another kids bike, cleaned it up.

On that note, I realized that the Lode Runner has to cut into the 2" tubing and have the head tube fully enclosed, and the Meridian can't: 1.5" is too small to enclose it completely. 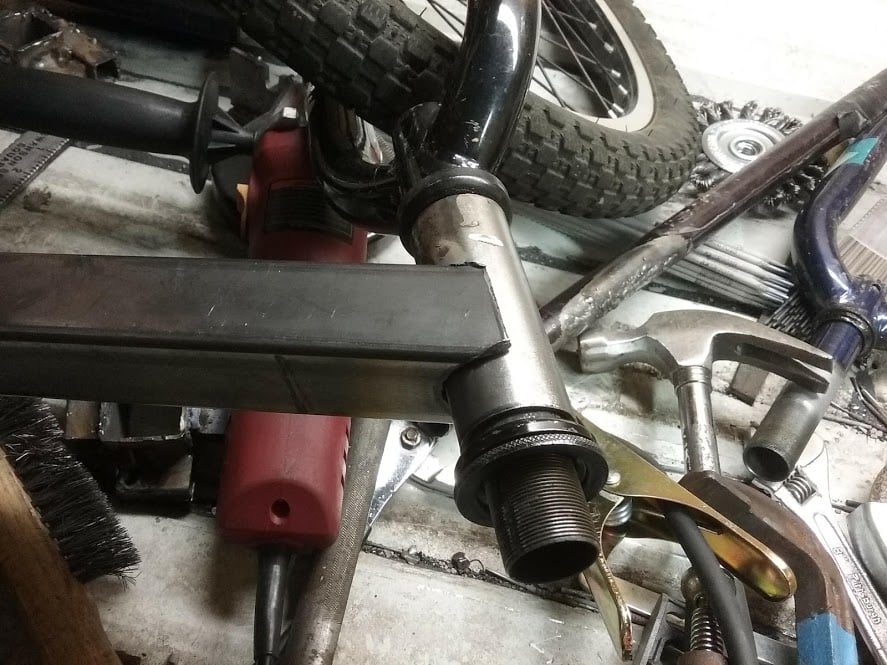 To me, it is amazing the amount of precision you can get with just a grinder! There was very little gap. As you can see in the picture, I temporarily mounted the fork and wheel. This was, of course, so that I could clamp the assembly to the already clamped together frame and see it stand on its own for the first time: 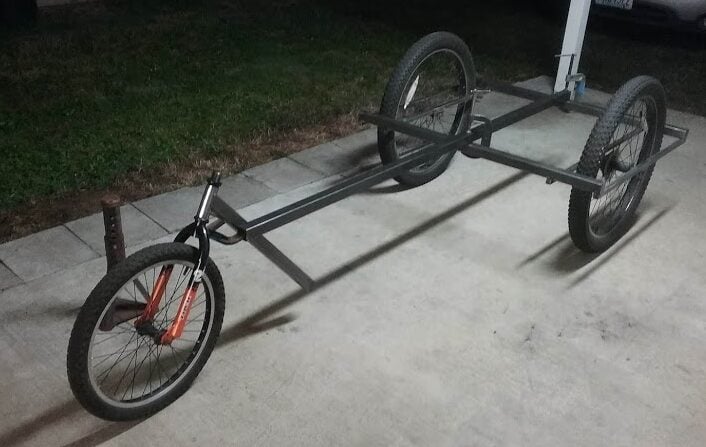 Whoa- that's front tube is short; TOO short! I have plan that will solve 2 problems at once. At the point where the main tube meets the rear frame, I'm going to notch the bottom just a little and introduce a 6 degree bend downward. This will drop the front of the tube 5", which will make the front tube longer and space the wheel out further forward, as well as lower the cranks, which was something I had been concerned with. Hopefully it's as tidy a solution as it seems!

As always I appreciate any comments and input.
Ryan - Elma WA
I go by "geocrasher" everywhere else
Instagram: https://www.instagram.com/miscdotgeek/
Blog/Website: https://miscdotgeek.com

Won't that cause your main boom to be angled downward in the front?
Personally, I think it looks good right now. In the pic it looks level,
but you may not mind a downward slope towards the front, IDK.
Nice work so far, either way! Keep rockin' it, buddy!
***
"Bent since 1985, but still not broken!"
Proud AZ Krew Member since June 25, 2007

SirJoey said:
Won't that cause your main boom to be angled downward in the front?
Click to expand...

Thank you for the kind words! Yes I do want the main boom to be 4-5" lower in the front. This will lower the cranks in relation to the seat, which is a design goal. It will also lengthen the front tube which to me looks too short. Because it's at a 45 degree angle, lengthening it also pushes the front wheel forward, spacing it further from the cranks. It's basically a Meridian front end
Ryan - Elma WA
I go by "geocrasher" everywhere else
Instagram: https://www.instagram.com/miscdotgeek/
Blog/Website: https://miscdotgeek.com

Looking good. I,ve been laid up with a case of poison ivy so not wanting to do much and now looking at your build I,m glad I've not done more. Of particular interest to me is the way your main boom extends all the way to the back. I will copy that and it should solve a problem that had me stumped. Excellent progress on your build so far.

Today I sacrificed some tubing to learn to weld it properly, and then I got to work cutting a 6 degree down angle into the main tube. The goal: About 1.5" ahead of the front crossmember, cut a notch into the main tube so that it would be 5" lower at the front of the trike than where it meets the first crossmember. I measured, marked, and made the first cut with the chop saw so it would be perfect: 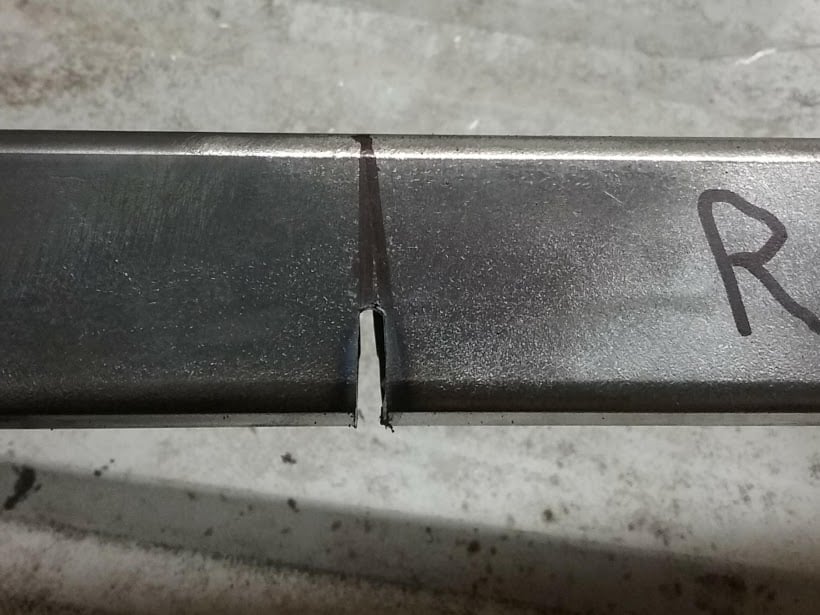 Then I hit it with the cutoff disk. Not perfect, but... 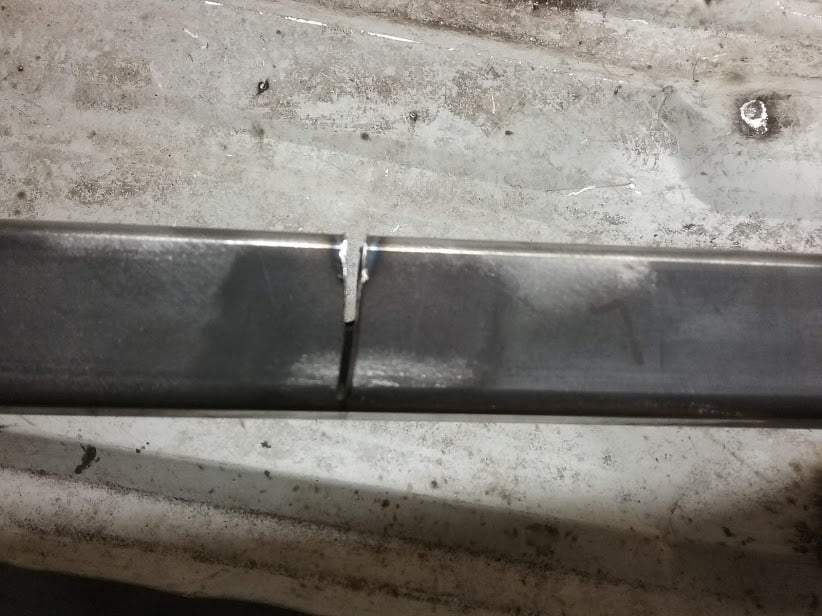 I didn't leave much of a gap: 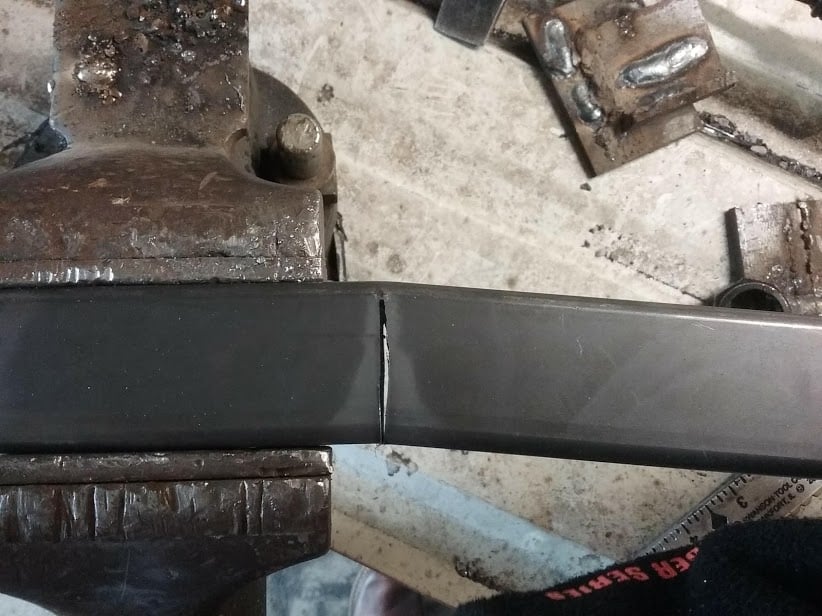 And it was successful! After carefully measuring 5" drop, I welded it up. 3/32" 6013 rod at 55A is so easy that it feels like I might be doing something wrong. We'll see when it comes time to ride the thing.I did do multiple passes on the bottom joint to make sure that it's plenty strong.

Last but not least, I mocked it all up again: 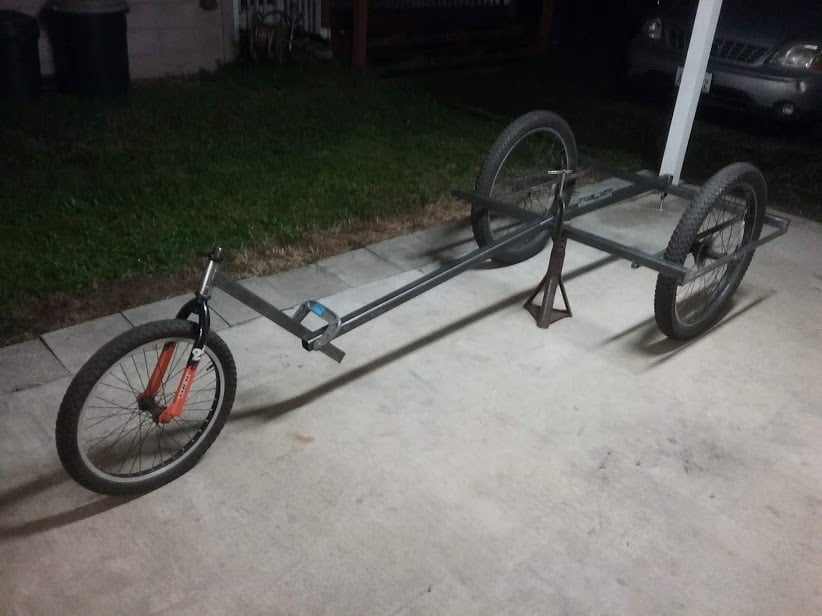 It looks pretty good, and I'm just about ready to do a final fitting on the head front tube/head tube and cut/weld that up. If you look carefully at the above pic, you can see that the main tube has about 1.5" of extra length welded to the back of it. Funny story about that. I cut the notch for the angle too far back :-/

I call this little sculpture "Measure Twice Cut Once" 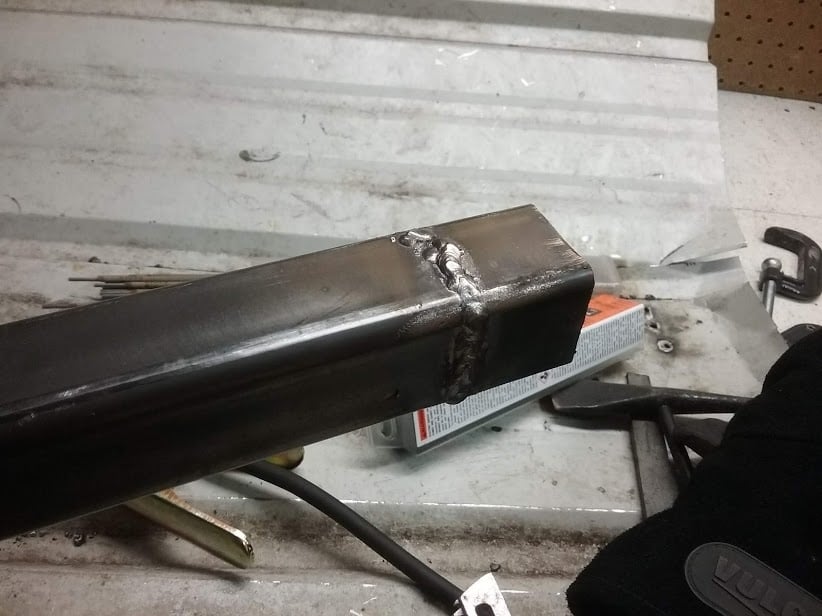 Next up: Head and front tube shenanigans, arranging for a place to sit on it, and pondering the question "Where on earth am I going to store this monstrosity!?"
Ryan - Elma WA
I go by "geocrasher" everywhere else
Instagram: https://www.instagram.com/miscdotgeek/
Blog/Website: https://miscdotgeek.com
S

"Where on earth am I going to store this monstrosity!?"
Click to expand...

One solution could be weld a couple of short verticals to the rear most horizontal angle them slightly towards the front , then the whole thing should stand on it's bum ?

The Hase KettWiesels achieve this by using the back of the seat , your seat will probably be to far forward ?

regards Paul
Regards Paul ...so many bikes to butcher and so little time ....

@stormbird thanks for the tilt-up idea! I will have to check that out once it's built. It's going to have a rear basked on it, so maybe I could incorporate that basket frame somehow. We'll see.

Today I had some time to myself so I was back at it. Part of the reason for this project is that it's a nice distraction to some other stuff going on in my life that I can't do anything about. Being able to zone out on this is really nice.

The first thing I did was mock up the front tube, which has the head tube tacked in. I needed to get the head tube angle and the location of the front tube mount both correct, while making sure the rear frame was level. That took some work! After marking the spot, I cut it, welded it up, and then worked to make sure the front end was square. Here are a couple of pictures:

I was able to confirm that the head tube was square, literally. 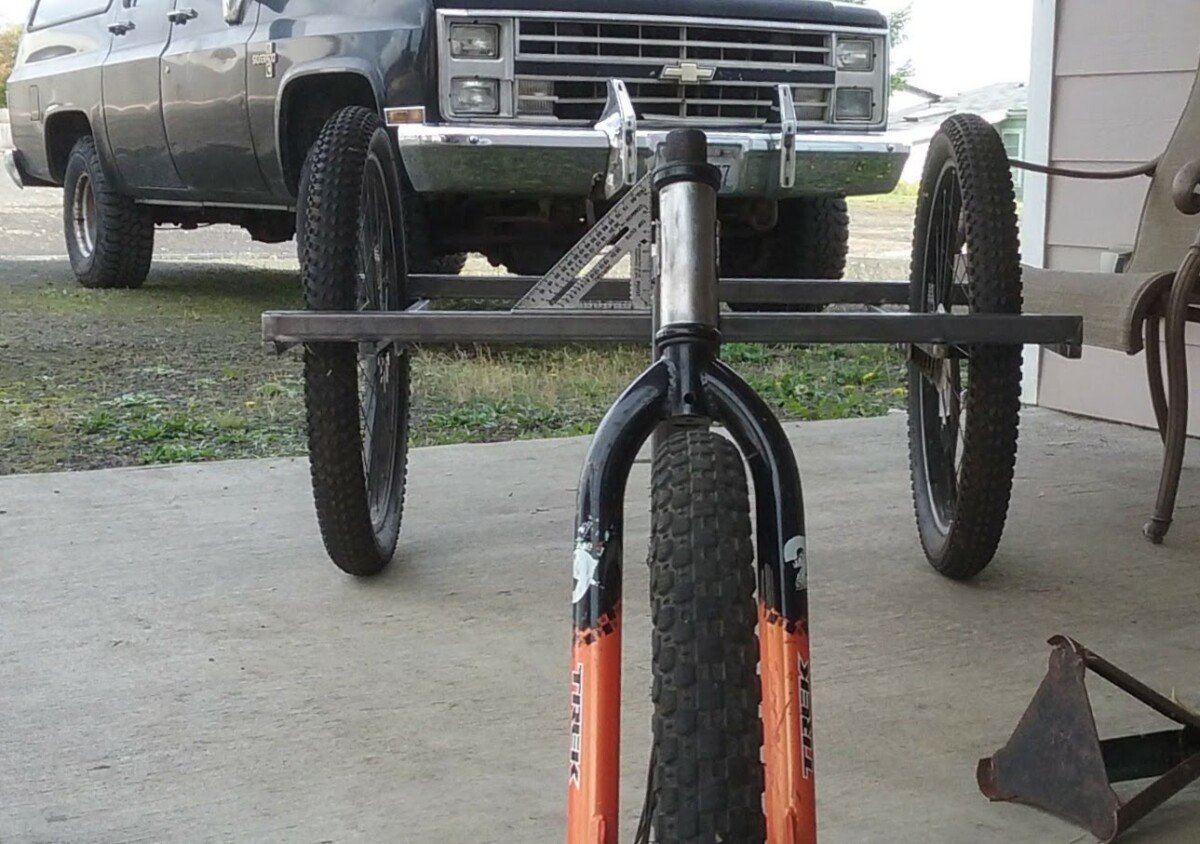 Since it was square, I finish welded the head tube into the front tube. I did miss one weld, so I need to go back and clean it up some, but that one part is done at least. Here it is in all its glory: 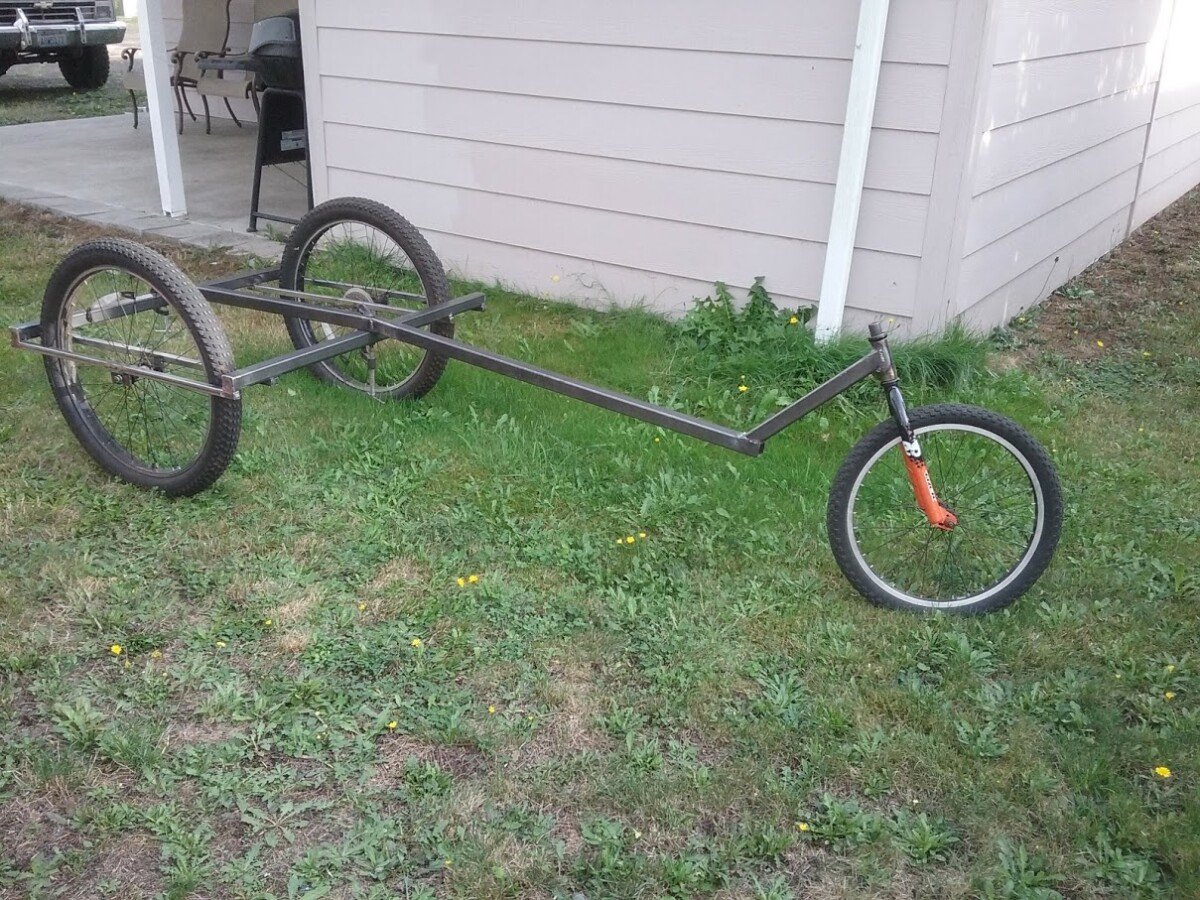 I still need to close up the front and rear ends of the main tube and install the seat mount. That'll be a project for tomorrow.

Also, I found a penguin in the shop: 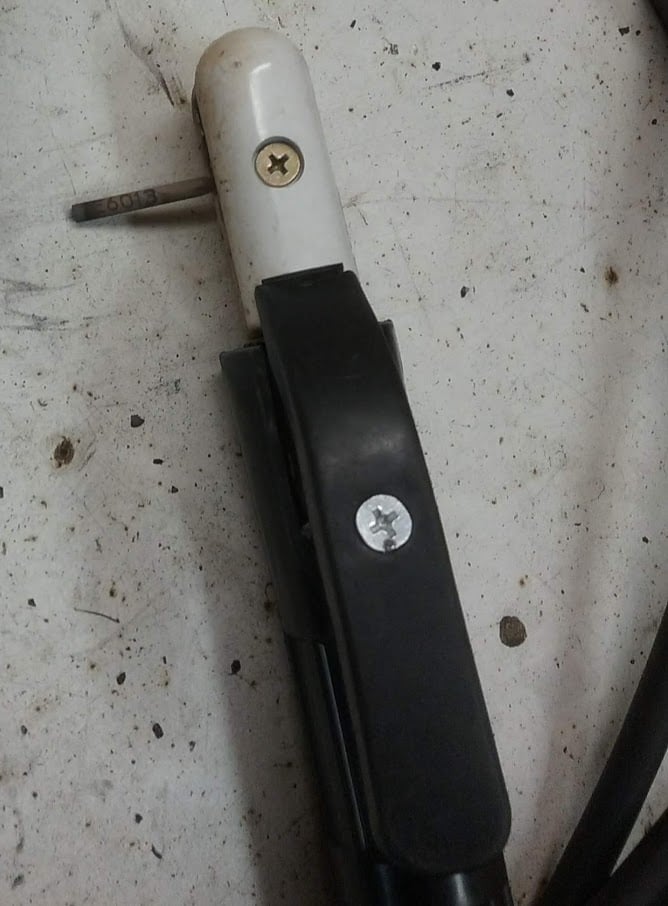 I forgot a few things in my last post. I measured it and have some specs:

While the main tube is only clamped to the rear frame, I was able to test by sitting on it. It held my weight (335lbs) without a problem.

The To-Do list is still pretty long, but it's a rolling chassis. After the seat mounts and the steering head tube are in place, I'll have some work to do on the rear frame, installing brake mounts at the very least. I don't want to have to do that after the main tube has been welded to the rear frame.
Ryan - Elma WA
I go by "geocrasher" everywhere else
Instagram: https://www.instagram.com/miscdotgeek/
Blog/Website: https://miscdotgeek.com
You must log in or register to reply here.
Share:
Facebook Twitter Google+ Reddit Pinterest Tumblr WhatsApp Email Link
Top