Hi, I'm interested in learning to build and a few helpful people recommended I come over to atomic zombie.
What gear would I need to get started and building something from atomic zombie plans?
I'm starting from scratch so I'm basically trying to work out everything from PPE to hardware and something to work on.
Thanks in advance!

The two things most used in my builds are an angle grinder and a welder. You'll need an assortment of spanners, screwdrivers and allen keys. PPE wise you'll need a welding mask, some welding gauntlets and some form of eye protection for grinding. Get a head mounted welding mask not a hand held as you'll need that hand for holding the work. The grinder will need cutting discs and flap wheels. Try not to buy the cheapest grinder as I've managed to destroy cheap ones inside a day. A bench mounted vice will be exceedingly usefull too. Unlike cheap grinders I made a cheap Chinese vice last decades. There'll be a million and one tools that'll be usefull too but I think that lot should get you started. Doubtless other folk will be able to add to that list with tools I've missed.

Regarding welders.
They are not a cheap item and come in 4 main types.
Gas or oxy accetalene. Expensive consumables, often hard to get in some parts of the world and puts a lot of heat into the work. Avoid imo.
Arc or stick. Can be used for this. Cheapest to buy and cheap consumables. Needs plenty of practise to avoid blowing holes in thin (16swg) steel.
MIG. Expensive to buy but reasonably cheap to run. Easiest to learn by a large margin. You can become competent with a few hours practise. Best system for a novice imo.
TIG. Most expensive. Middling learning curve. Probably the best system if money is not an issue.
L

Popshot said:
Doubtless other folk will be able to add to that list with tools I've missed.
Click to expand...

Ooo challenge accepted.
A welding magnet and a wire brush. I consider these pretty important for me.. and cheap. Ear plugs or muffs for grinding is technically essential and at the cost of ear plugs ur just lazy/careless to not wear ear protection.

Each to their own, but for a different opinion for Mr Skirmish.. my dirt cheap angle grinder has lasted years, and i will use the 1 grinding disc that came with it for the next 100 years instead of buying flap wheels.
A big clamp and a sawhorse can substitute as a poor/workbenchless man's vice (obviously a bench vice is nicer).
Um... an adjustable spanner can probably substitute for a spanner set.
Buy some furniture from ikea for a free allen key.

One more tool I can add is one of those horrible cheap stamped multi spanners that used to be free with bikes 40 years ago. A really thin spanner is needed for many wheel axles. 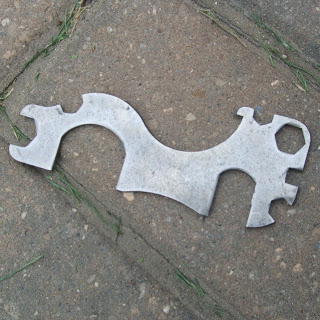 A drill, otherwise drilling holes will be very tedious.

in addition to what has been listed above you can never have to many clamps (spring, C-clamp, Adjustable)
pliers/ vice grips are not absolutely necessary but nice to have for holding smaller parts for welding grinding
hammer for persuading parts into position

In short, it's an ongoing investment of own tools and capabilities.
I'm building my own workshop for the last 17 years. Not cheap, but it makes doing stranger things a lot easier.
Last edited: Oct 31, 2020

I think mine is. My workshop was in the living room for 7 years. (welding and grinding was for the shed tough)

I happen to really like stick welding, mostly because I can't afford Oxy/Acetylene, MIG, or TIG. $115 on Amazon got me a good one that works well. Yeah, there's a learning curve, but it's not too bad

September isn’t over, but it’s been a busy month with lots of progress! In the August Update, I mentioned that the welder I had just wasn’t cutting it. The Misc Dot Welder from last year was an exciting purchase, with a promise of delivering 50A of power which is enough to do anything I need …...

Greets!
Some tutorials here as well...

DIY Plans for Bikes, Trikes, Choppers and Farm Equipment. Easy to follow DIY Plans made for Everyone. Instant Download.