I think I may have figured out how the adapters are configured for the disk brakes, starting from the frame going to the wheel hub.

On one of the pictures from the gentleman in Ottawa, I saw the one of the unused holes that is in the adapter plate that sandwiches the drum to the hub, so I'm mostly guessing, but if I have figured it correctly the hub with the adapter plate and cup only makes contact with the freewheel (guessing it's a smaller gear than the one I have) at the bolts, so the cup will spin around the freewheel adapter without touching it. But if anyone has a different idea, I'd love to hear it.

My original idea to try to copy this was to put a thin spacer against the hub, then rotor, then adapter plate with the "prongs" and bolt it to the hub, then have a spacer adapter going from the frame to the caliper to put the caliper where the rotor is and use the current freewheel setup. Bonus to this idea would be easier to put a large rotor on it as the spacer adapter would have to be welded/machined, downside is the spacer would maybe have to be custom machine and cost a bit, also may put a lot of leverage on the frame in a hard braking situation and possibly damage or fail a few parts, but a strut rod from the spacer to farther forward on the frame and bolted to both might be enough strength to keep that from happening. Again any ideas will be welcome as I have nothing set in stone and I'm just enjoying the bike the way it is, I am really thinking about a Loadrunner 2 though, could be nice to get groceries with and not need a trailer, the Rhoades is just too big to park at a bike rack, but I may ride it past my local Walmart someday just to get looks, lol
Q

Skull Bucket Garage said:
quixotic, your pictures are not showing up for me
Click to expand...

Skull Bucket, Sorry about the picture issue. They show up on my computer but I'll repost them here regardless. Let me know if you can see them. 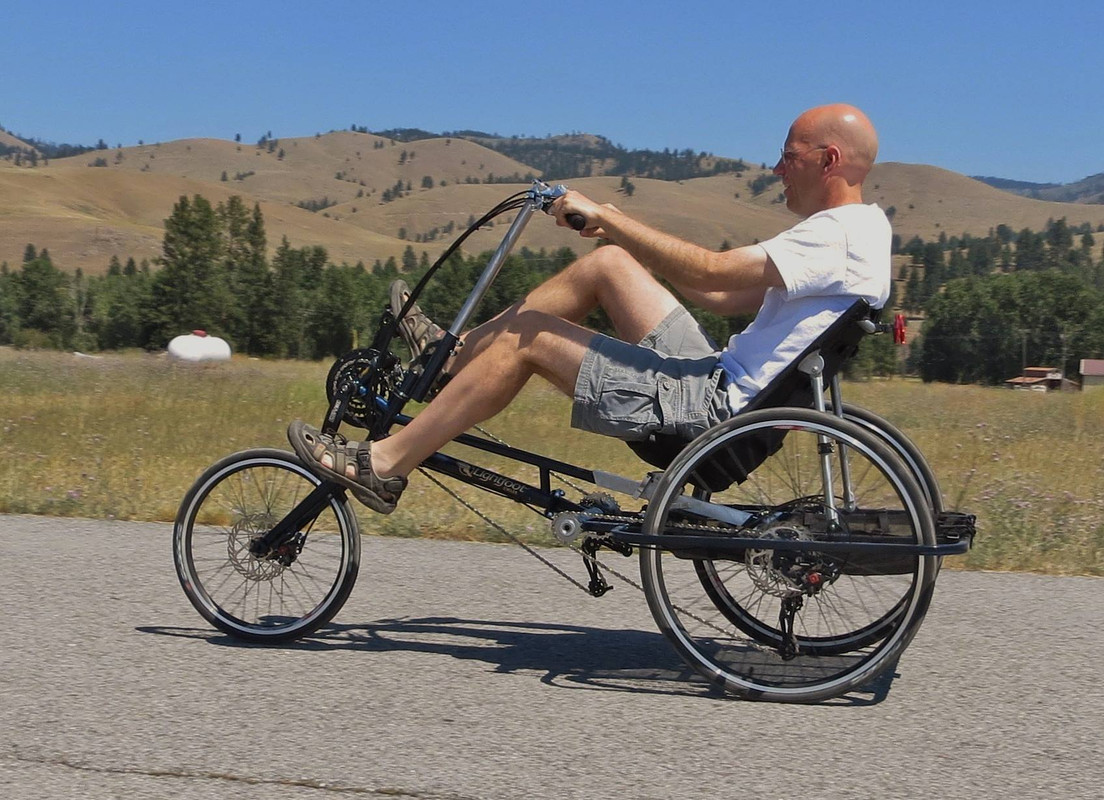 And the two pictures of the Loderunner 2 crossover. First is a "rear" view and the second is a right side. 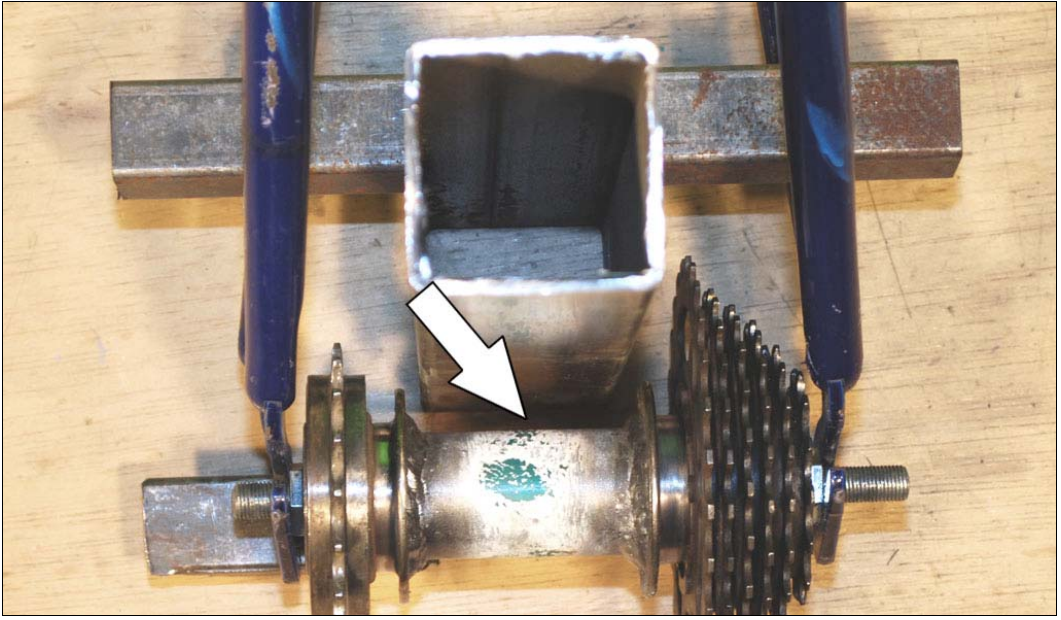 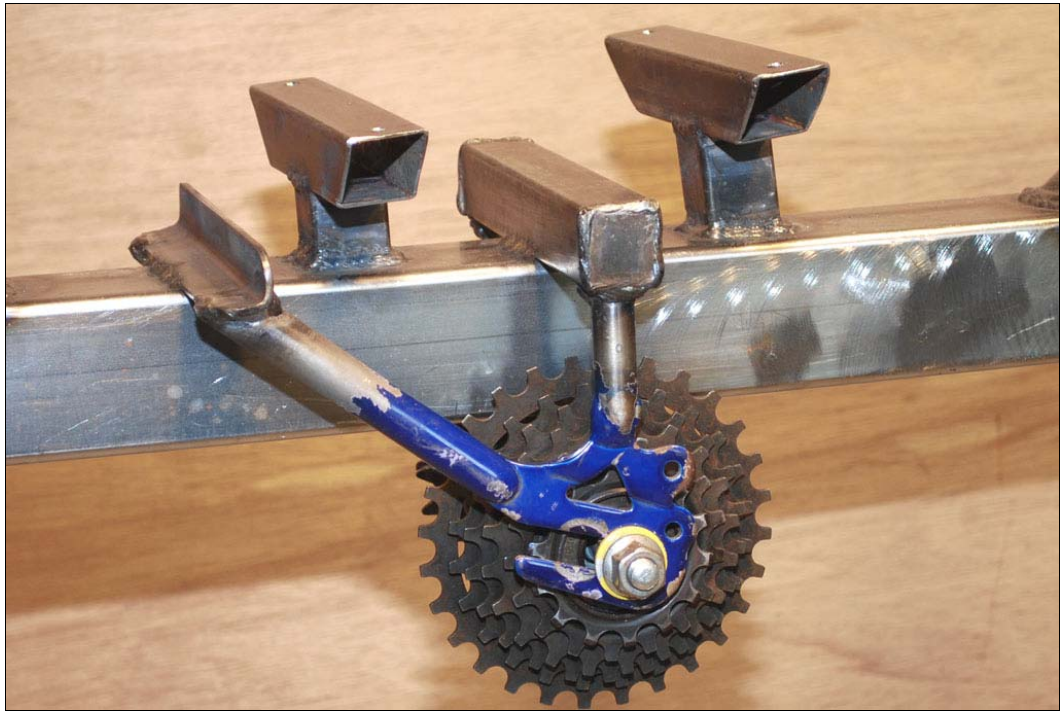 Let's run this up the flagpole. We'll build two assemblies.

Assembly A
Assembly B
Attach assembly A to the hub. Slide assembly B on the shaft and align prongs with freewheel. Slide rotor on shaft followed by the wheel and assembly A. Align all the 6 bolt holes and secure with bolts and locknuts

With this approach you wouldn't need any custom parts but you might need to grind down the shaft collars to get the overall width to work out.

Yeah, it seems to be just me. As I can see the pictures in the email alert, but not on here, so I'm guessing it's some setting in my computer.

I may have an even more simple solution:

Assembly A
Assembly B
With the freewheel adapter off the axle, slide assembly b over the back side and attach the frewheel adapter on the axle in it's normal position, slide bolts in the remaining holes, side assembly a onto the bolts, slide rear wheel on and fit the bolts through the holes on the hub, tighten up the bolts and add axle nut, very similar to your idea, just more compact. The only thing that might have to be added would be the "prongs" to engage the freewheel depending on the size of the freewheel gear, but I think the bolts could be used instead of the "prongs", plus three would be better than two. But it's all just theory for right now
Q

I was concerned my buildup may not fit given the amount of room.


Skull Bucket Garage said:
But it's all just theory for right now
Click to expand...

Agreed. But I find doing a couple rounds of "theorizing" upfront helps to work through the kinks. Much easier to change things with pen and paper than grinder and welder.

BTW, if you decide to move forward with the mid drive and need a source for freewheel adapters you may want to checkout Staton-Inc freewheel adapters. They make multiple flavors of FW adapters to fit different shaft sizes with and without set screws.

Thank you quixotic, I am thinking very seriously about making the mid drives, I just have to get a caliper to measure the actual OD of the rear axle and get measurements from the ID of the holes on the frame for the bearings. Also looks like I'll have to swap the cranks over so they drive from the right side which may cause other problems for e assist plans I had, but that is another story for another thread.

When I do get all the parts together, bearings, adapters, shaft collars, jackshafts, rear derailers, cables (I have similar shifters setting around), and freewheel clusters, I will try to get a small update, but it may be a while and I have a couple more important things to take care of. I am really thinking about talking to the friend that helped me while I couldn't see to offer maybe helping him build a Kyoto Cruiser or Loadruuner 2 as he really likes the Rhoades car and maybe I can get him something that he can use and add this stuff to make it easier to ride.
Q

Skull Bucket, Thank you for the info you've provided to date and best of luck with any mods to your Rhoades car. I'll keep an eye out for any future news whenever it comes.

Okay, this is probably not gonna be of much help, cause even though I owned one with
disc brakes, it was probably close to 20 years ago, & I only have 2 pics of the drivetrain: 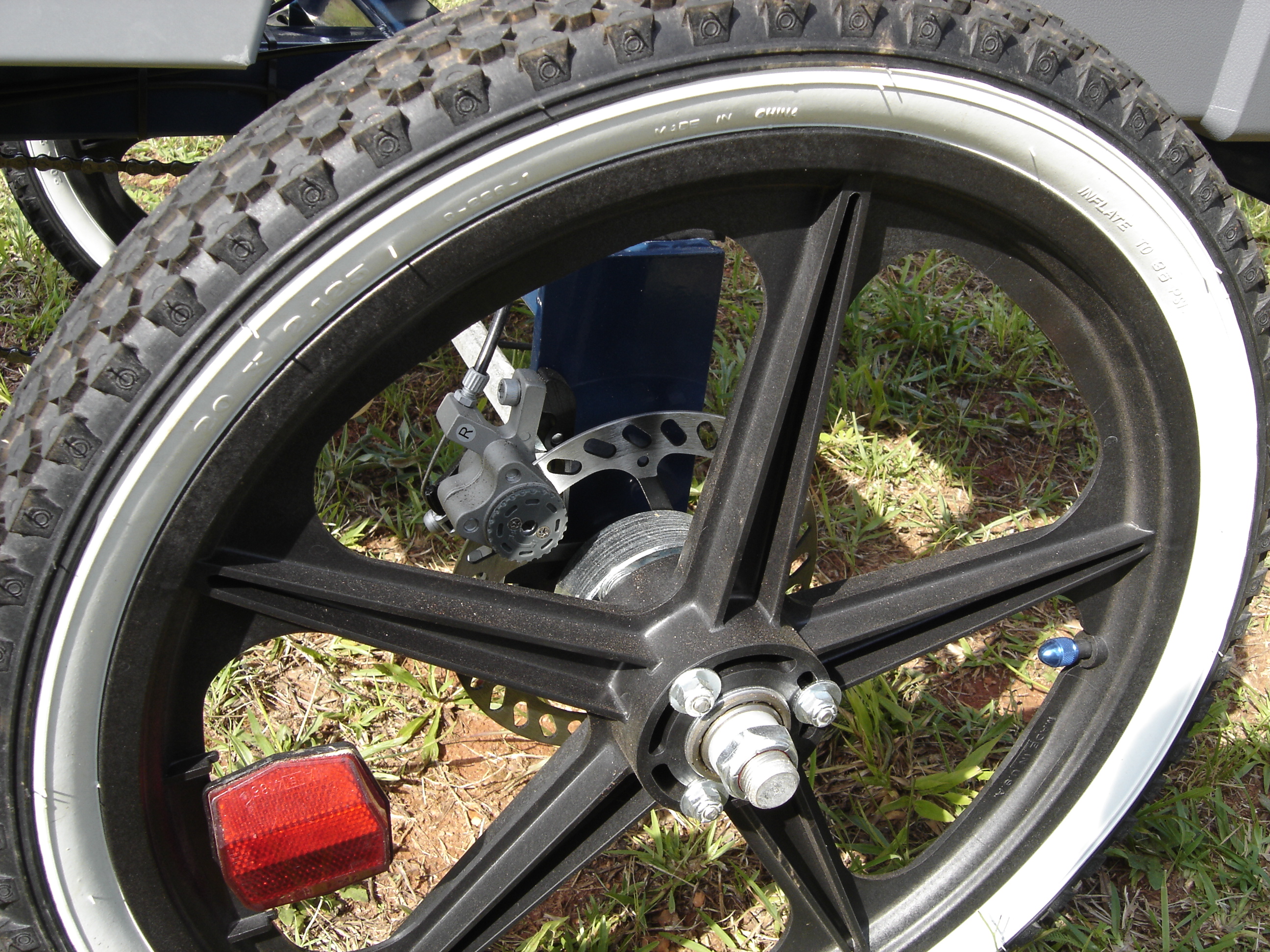 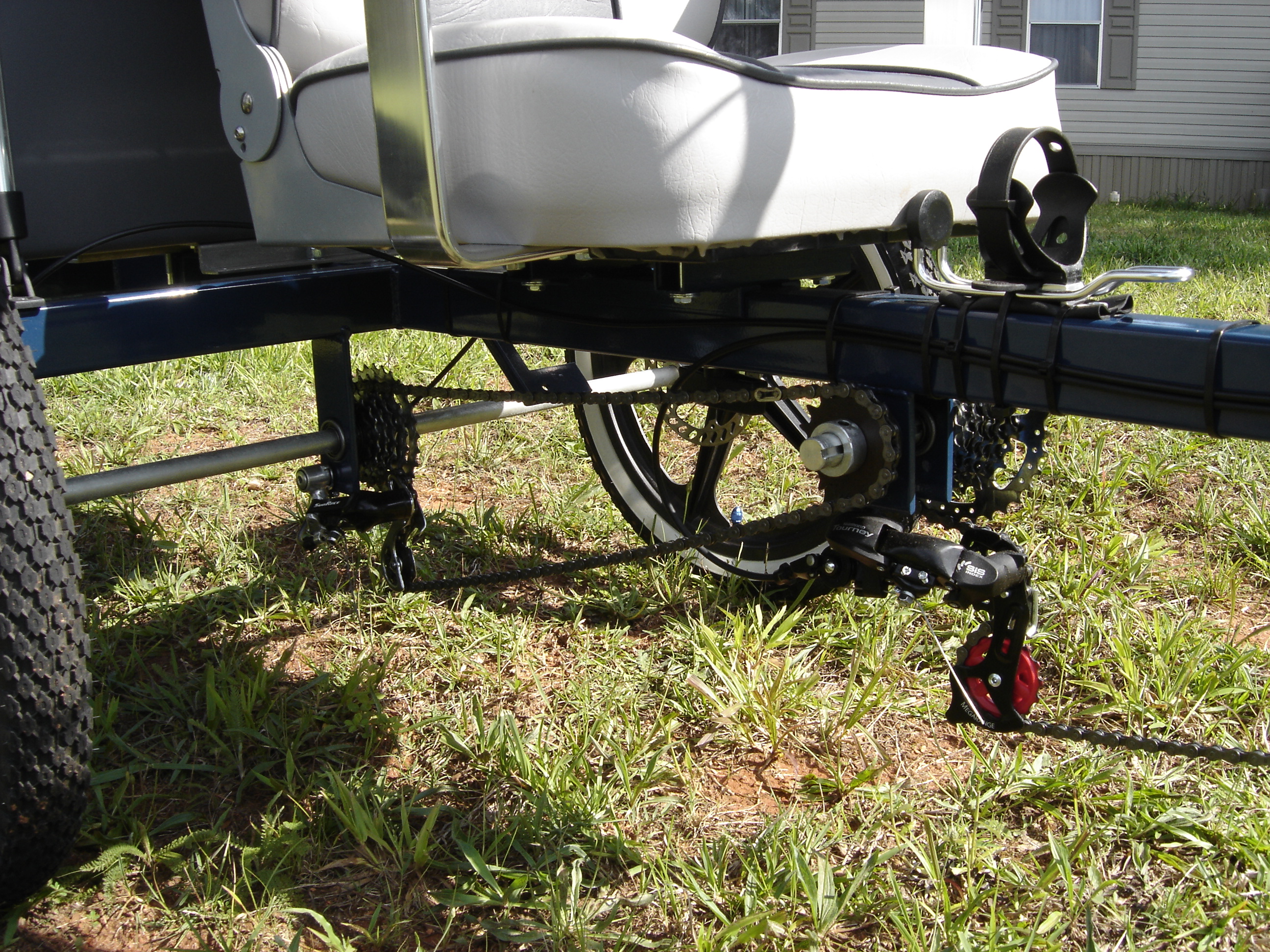 Sorry. Best I can do.

SirJoey, did you ever pull the wheel off? I'm just wondering what was inside the adapter. And big thanks for the pictures

Skull Bucket Garage said:
SirJoey, did you ever pull the wheel off? I'm just wondering what was inside the adapter. And big thanks for the pictures
Click to expand...

Honestly, I never had it off. It was delivered by a tractor-trailer, fully assembled, & strapped to a skid.
But looking at the pics, it looks like it would've come off simply by removing that big axle nut in the center.
I only kept it for about a year, if memory serves, & sold it around the time I joined AZ here, & started building my own!
I have other pics, but they're just general pics of the whole thing, not much in the way of details.

One thing I do remember, however, was my disappointment in the low quality components for such an expensive
machine. With the added optional canopy top, mine came to around $3,000! Additionally, I was sadly disappointed
in the fact that it had no braze-ons at all! All cables were zip-tied in place, no cable stops, nothing. Not even a water-bottle
cage braze-on. Notice in the pic above, my water-bottle cage is ZIP-TIED to the frame. And those plastic "mag wheels"?
They should've been aluminum for that kind of money, IMO. And a BOAT SEAT? REALLY?!!
Fun to ride, & comfy, but pretty cheesy for a $3,000 machine!
***
Last edited: Jul 24, 2021
"Bent since 1985, but still not broken!"
Proud AZ Krew Member since June 25, 2007

I will agree with the bottle cage and the cable management, the plastic mags were probably stronger than aluminimum ones at that time, I paid way less for mine, but I can see the down side of things too. It's a shame the current company won't foster some retro support to owners, the new bikes look like they have been improved a bit, but I would love to see if they have a different rear axle setup or stayed with the older style.
You must log in or register to reply here.
Share:
Facebook Twitter Google+ Reddit Pinterest Tumblr WhatsApp Email Link
Top