Fair to say this is the most technology we have ever seen on this forum !

Blown away Paul
Regards Paul ...so many bikes to butcher and so little time ....

Handle every stressful situation like a dog. If you can't eat it or play with it, pee on it and walk away.
V

Fair to say this is the most technology we have ever seen on this forum !

Thanks Paul.
It' been 14 years of try "this" or try "that" as I started this project with minimal theoretical knowledge. Much of the "technology" is the result of practical failure -vs-success with the failures far outnumbering the successful elements.
Cheers
V

STEERING LINKAGE
While developing the caster wheel & hub, concurrent with the tilt mechanisms, I was also internet searching and experimenting to find the ideal steering linkage to compliment the caster steering.
The relationship between F to C and the steering linkage proved to be bothersome. On the one hand, some form of linkage was needed to provide Ackerman geometry as well as to keep the front wheels aligned and to steer when maneuvering backwards. But, on the other hand, the direct linkage must not interfere with the F to C action of the front wheels when moving forward, and yet, must somehow work in concert with the tilting and suspension actions of the front wheels.
Well, according to my wife, the prolonged pursuit for the best-practice linkage somehow crossed the threshold from perseverance into stupid stubbornness. I believe her exact words were "blah, blah, double stupid"
After numerous failures, some so so results, I came up with the linkage shown in this photo. 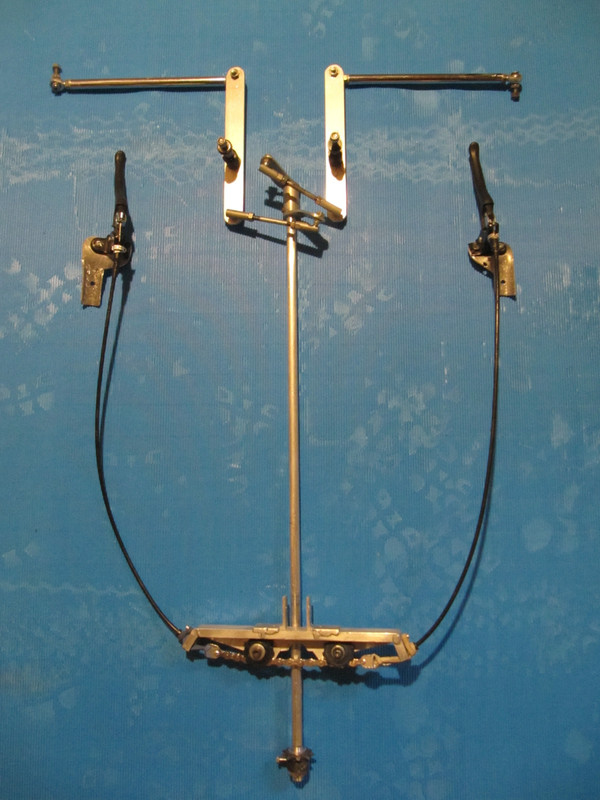 The linkage consists of the following parts observable in the photo above.
--two bicycle brake levers to be mounted to the tilt control lever handles (not shown) in a manner which allows me to push the brake lever with my thumb while grasping the tilt lever handle.
--two cables attached to the thumb levers and linked together by a short bicycle chain which is housed within a cassette consisting of two small idler sprockets.
--a steering shaft with a nine tooth sprocket fixed at the cable cassette end ( or posterior end ) and a steering knuckle fixed to the anterior end. The knuckle pivotally connects two short rods to blade- like constructs, which will be pivotally attached beneath the upper front swingarms. These blades can move synchronously ( up and down ) with the swingarms as the vehicle tilts, but, they can also pivot laterally to move the tie rods to alter the steer angle.
Hopefully, when you see these parts in there proper places and moving back and forth in the following videos, this will make more sense.
For the next two videos I "butchered" ( couldn't resist using Paul's fitting expression ) the upper right swingarm of a previous vehicle and inserted a thin piece of aluminium to reduce the bulk of the swingarm. This skinny substitute allows us to see the lateral movements of the pivot blade and tie rod as the right wheel is turned to the right, a little to the left, and back to straight ahead.
The frontal view of the next video provides an opportunity to see the action of of the steering knuckle and the linkage to the tie rods. The steering shaft and affixed knuckle are located behind the square tube of the mainframe. The hole in the square tube provides access to a bolt which holds the shaft and knuckle in place. Rotating the shaft and knuckle clockwise/ anti-clockwise impacts the linkage to the tie rods.
Next time I will describe the rear wheel drive as it is today and what it might eventually look like.
V

REAR WHEEL DRIVE
Thanks to the members who cautioned me last year about the legal considerations of installing a Series Hybrid Drive system. I subsequently decided to incorporate a jack shaft to drive the right wheel and later this year I plan to install a hub motor to drive the left wheel. Almost the mirror image to the drive-train Hugh has put into his revamped delta.
The chain, brake, and aero-covers will be the focus of this post.
This is what it looks like now. 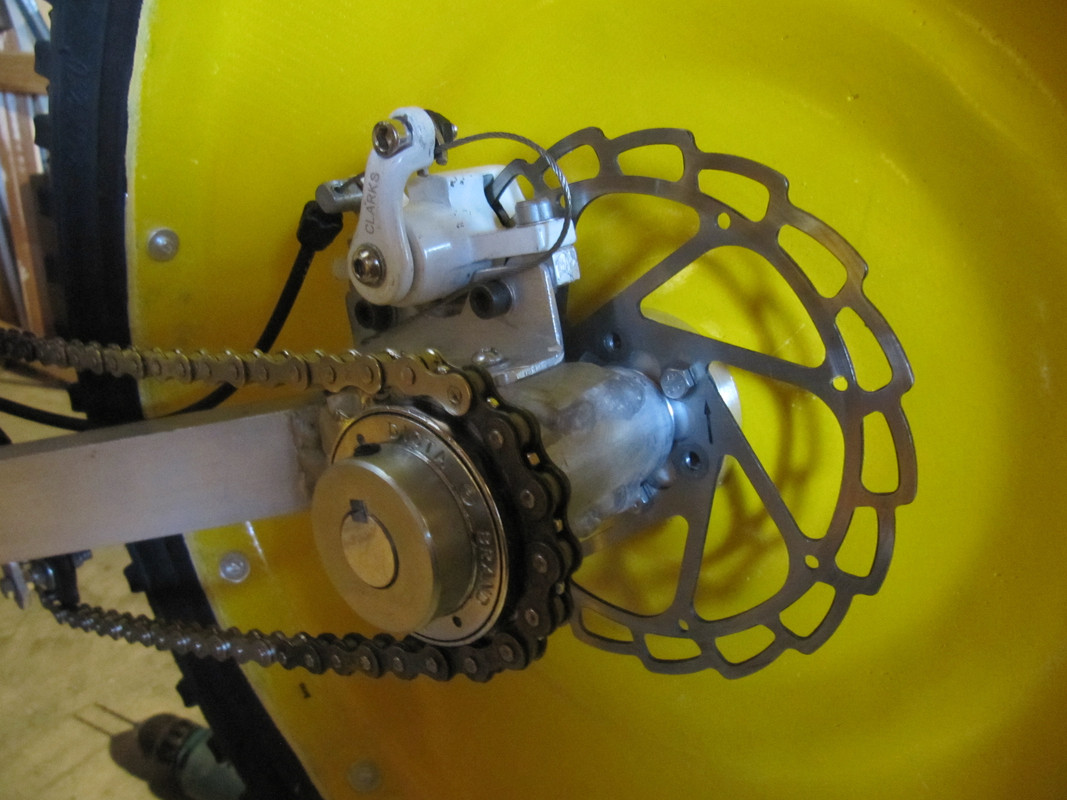 And this is what it looks like from above the wheel 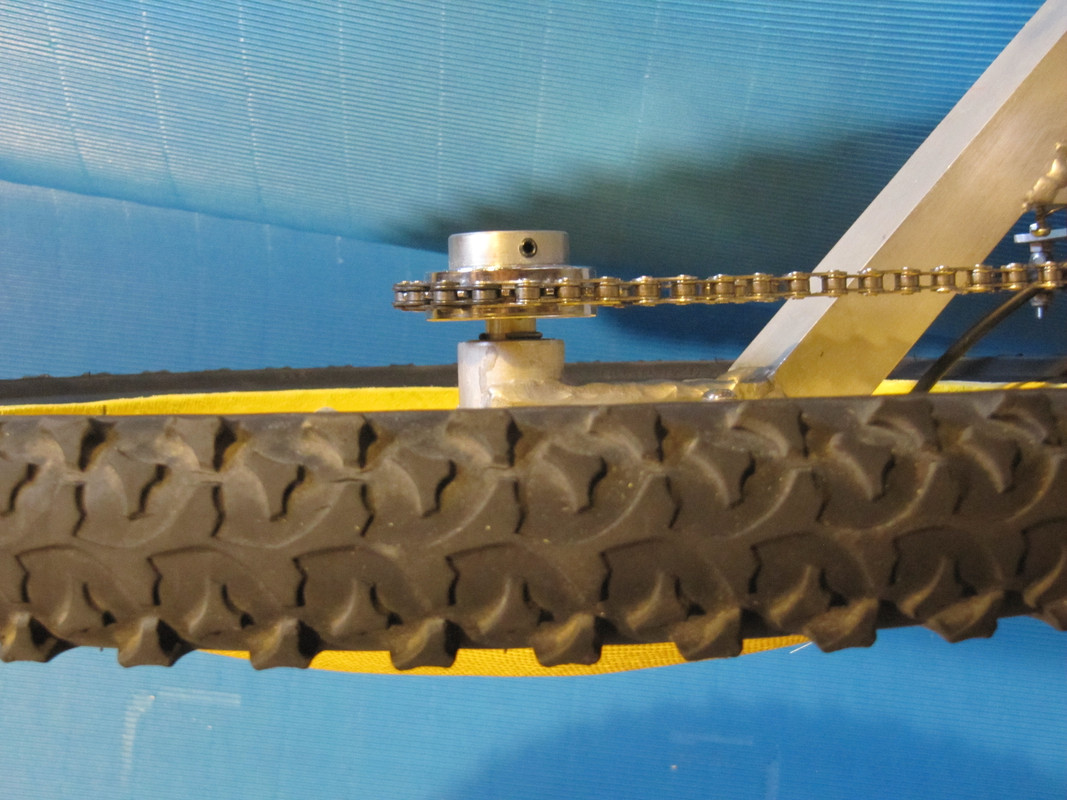 The brake is tucked away within the concave wheel. After I install the front brakes, all 4 wheels will be fitted with non rotating aero-covers. The following videos show the chain drive operating without a cover, with an aero-cover and finally with a chain cover.Operating with the non rotating cover in this next videoI will be poking holes in the cover to cool the brake. But first, I'll test the effects of the regen-braking from the hub motor on the delta model before I poke too many holes. The next video shows the rear drive operating with both an aero and a chain cover. The covers shown in the videos are proof-of-concept quality. I plan to test different materials, sizes, and designs because I don't want to "butcher" the shell's tail section any more than is necessary to accommodate the tilting action of the rear swingarm at the chain-line.
My next post will focus on how the drive, tilt, and steering work together as I ride the quad along the straight and narrow and around curves.
V

DRIVE -- TILT -- STEERING
Using blue cardboard to simulate a bicycle path, I will attempt to show how the drive and tilt impact the steering.
For the majority of my riding time, while pedaling along straight sections of a pathway, I simply hold the tilt levers to keep the the vehicle in a substantially upright position. No manual ( thumb ) steering input is required. The tilt mechanisms function like a variable lean-lock device which I can adjust to accommodate variations in road surface and slope.
Although It's not observable to me while I'm pedaling forward, I'm aware that the forward rotating front wheels are constantly and freely adjusting ( castering ) to my tilt control inputs which keep the vehicle steered along the straight and narrow.
I try to illustrate this in the following two videos,First I pedal slowly forward in a straight line while holding the tilt levers stationary. In the second video I put both feet down and push to coast backwards in a straight line. No steer inputs are made in either direction. Well, I actually put my feet down and push twice in the next video. When entering a bend in the pathway or a sharp corner I increase the tilt just enough to free-to-caster around the bend or corner at my current speed. Again, manual ( thumb ) steer inputs are not required.
In the next video I try to demonstrate the F to C steering action while slowly negotiating a curve to my right. I start by first tilting the vehicle from side to side to indicate that controlled tilting (without manual steer input) will be used. When I tilt the stationary vehicle there is no change in the steer angle, but as I pedal forward and actuate the seat and levers to tilt the vehicle, the forward rotating front wheels change their steer angle in response to the controlled tilting of their steering axis to follow the curve in the pathway. Although F to C operates at this slow speed, it works much better when accelerating from a stop into higher speeds where it performs smoothly and predictably (always the correct steer angle for the tilt and speed of the vehicle). A bonus is, that actuating the tilt control mechanisms becomes easier with increased speeds as the dynamic forces kick in.
Riding this prototype is quite basic. Unlike the engage/disengage requirement of most steer-tilt- control vehicles, this prototype does not require transitioning from manual to caster and back to manual steering at a certain speed threshold, and there is no obligation to think about the technique of steer/counter steer. I simply control vehicle tilt at all times and rely on free-to-caster steering to get me around the bends, corners and straight sections as F to C operates from full stop to full speed and back to full stop.
Since assembling this prototype and riding it within my neighbourhood, I have found that that manual steering is rarely needed. And when it is used, I just hold the vehicle in a substantially upright position and engage the thumb levers for steering.
In the next video I demonstrate this approach on a curve to my left. I begin by reaching for the tilt levers and press the thumb levers to show what I do to alter the steer angle of the front wheels when riding. I then pedal slowly forward, holding the tilt levers stationary to maintain the vehicle's upright posture and apply steer inputs with the thumb levers. I then maneuver backwards using thumb steering Operationally, this vehicle is a lot simpler than my previous ones. As shown in the above video, when I'm thumb steering, I'm not tilting. And, as shown in the one before, when I'm tilting, I don't have to steer.
Although I have not yet tested this prototype in all riding situations, I'm satisfied with how it performs so far. But, I'm a little disappointed with its weight. I had hoped that removing the hand cranking drive train and building a lighter two-part mainframe would have reduced the original weight of 36 Kg by more than the 3.7 Kg I succeeded in shedding.
And, although I have constantly looked for ways, I haven't been able to significantly reduce the number of components or their complexity, except for the delta model, which has one less front wheel and spindle, three fewer swingarms, a simplified steering knuckle, and a less intricate nosecone.
I look forward to your replies- especially any suggestions on how I might be able to simplify any of the components.
You must log in or register to reply here.
Share:
Facebook Twitter Google+ Reddit Pinterest Tumblr WhatsApp Email Link
Top